Investigators have traced a take-off weight error on a TUI Airways Boeing 737-800 to a flaw introduced to a reservations system by international differences in the manner that female passengers are addressed.

The reservations system had been upgraded during a period in which TUI Airways operations were suspended as a consequence of the pandemic.

But the programming upgrade had been carried out in a country where the title ‘Ms’ was used for adult women while ‘Miss’ referred to a female child.

When adult female passengers in the UK checked in for the flight from Birmingham using the term ‘Miss’, they were automatically classified as a child and allocated the standard child weight of 35kg rather than the standard female weight of 69kg.

The UK Air Accidents Investigation Branch says 38 female passengers were misidentified as children and this meant the loadsheet generated for the flight to Palma de Mallorca, on 21 July last year, was more than 1.2t below the actual aircraft weight. 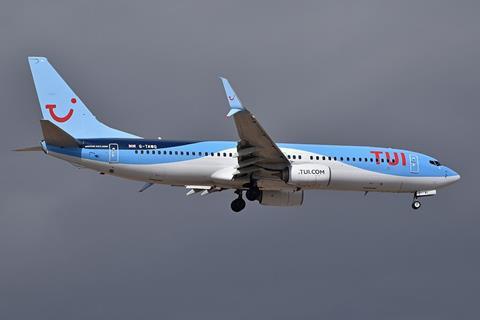 While the crew noticed that the loadsheet take-off weight of just under 64.9t was more than 1.6t below the estimate on the flightplan – and showed 65 rather than the expected 29 children on board – the captain believed the discrepancy was “plausible”, given travel disruptions arising from the pandemic.

The pilots also discussed a difference between the actual and expected zero-fuel weight, as well as the use of a mix of standard and actual baggage weights on the loadsheet, but ultimately decided they could satisfactorily explain away the variances in the figures.

Take-off performance was calculated on the basis of a 5kt tailwind, using the loadsheet data, and the aircraft departed without incident.

Analysis by the investigators showed the take-off airspeeds should have been 1kt higher. Although incorrect take-off weights were used, the thrust level employed was slightly higher than that required for the conditions.

“This meant the safe operation of the aircraft was not compromised,” says the inquiry.

But it states that the 737 involved (G-TAWG) was the first of three aircraft to depart from the UK on the same date with inaccurate loadsheets caused by the same issue.

Investigators also found that the reservations system programming flaw had surfaced 11 days before, on 10 July, when three adult women were inadvertently checked-in as children on the first flights since the upgrade.

Although the error was spotted by ground personnel, the inquiry says: “No safety or ground operations reports were submitted about this occurrence.”

The issue was initially addressed by manually changing the titles of all adult female passengers on each booking for upcoming flights, with check-in staff instructed to pay particular attention to data in the system.

Programmers who performed the upgrade adapted the software to change the title of female passengers automatically, implementing this on 17 July, but this was only capable of changing bookings before check-in. Records for booked passengers using the title ‘Miss’ who were already checked in – including those online – would not be amended.

Programmers were still working on improvements on 20 July, the day before the incident. The inquiry says a combination of online check-in being open, possible interruption to the software, and manual correction teams not having worked over the 18-19 July weekend, meant incorrectly-allocated passenger weights were not amended.

TUI Airways subsequently reinforced measures to prevent a recurrence, including introducing a formalised procedure for a customer care executive to check bookings.