Turkish A330 strayed to runway shoulder after roll input before touchdown

Investigators have determined that right roll inputs just before touchdown caused a Turkish Airlines Airbus A330-300 to land to the right of the centreline at Port Harcourt and stray to the runway shoulder, damaging lighting as well as parts of the aircraft.

The aircraft (TC-LOL) had been arriving from Istanbul in darkness on 31 December 2019, conducting an ILS approach to runway 21.

Nigeria’s Accident Investigation Bureau says the aircraft was subject to a “non-conventional flare”, with the captain applying several nose-up and nose-down inputs during the last 100ft of its descent, as well as right aileron commands.

The aircraft began to drift to the right of the centreline as a result of the roll input.

But instead of correcting with left roll, the captain applied left rudder in the last 45ft to touchdown, says the inquiry.

“This was intended to arrest the lateral deviation and to change the trajectory of the aircraft that was already deviating progressively to the right,” it adds.

“This left rudder application did not change the aircraft trajectory but was able to stop the lateral deviation increasing further.” 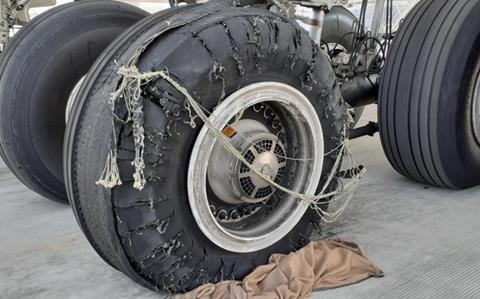 Tyres of the A330 were damaged during the incident

The A330 touched down to the right of the centreline about 612m from the threshold, the right main landing-gear crossing the edge line onto the shoulder after just 27m.

It struck three runway edge lights before returning to the runway at a distance of 1,037m from the threshold and regaining the centreline at 1,478m.

Investigators state that one of the main tyres was deflated, with shredded plies, while others were scuffed. Dents were found on inboard flaps and the interior of the right-hand Rolls-Royce Trent 700 engine, but none of the 295 occupants was injured. 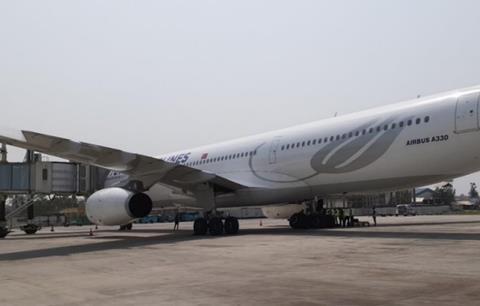 Parked after arrival at Port Harcourt, TC-LOL was the aircraft involved