Turkish Airlines has reached an agreement with Boeing over compensation for the financial impact relating to the grounding of the 737 Max.

The carrier is intending to introduce 75 Max jets to its fleet, comprising 65 Max 8s and 10 of the larger Max 9.

But while it has received 12 of the re-engined aircraft, deliveries have been held up by the worldwide grounding of the type in March. 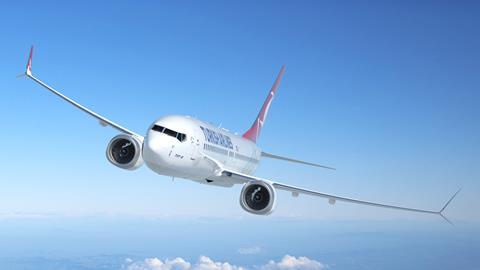 Turkish Airlines has revealed that it “came to an agreement” with Boeing concerning “compensation for certain losses” caused by the grounding as well as the non-delivery of 737 Max aircraft.

It has not disclosed the extent or nature of the compensation, nor whether the agreement is a final or interim arrangement.

Turkish Airlines’ latest fleet plan shows the airline aims to have 48 Max jets in its fleet, including the 10 Max 9s, by the end of 2020.

But these numbers, it says, are only based on the original fleet-development strategy and are “subject to change” depending on developments within Boeing.

Its joint venture carrier SunExpress recently opted to increase its own Max commitment to 42 firm aircraft, through an agreement to take 10 more.