Russian analysts have been examining the behaviour of the proposed UZGA TVRS-44 turboprop during ditching events.

The aircraft – also known as the ‘Ladoga’ – is a twin-engined high-wing design intended to accommodate 40-50 passengers.

Researchers at the Central Aerohydrodynamic Institute have completed a series of tests for an emergency water ditching using a model of the aircraft.

“We were faced with the task of collecting as much experimental data as possible on the behaviour of the aircraft model during landing and the resulting g-forces,” says engineer Alexander Maksyutov. 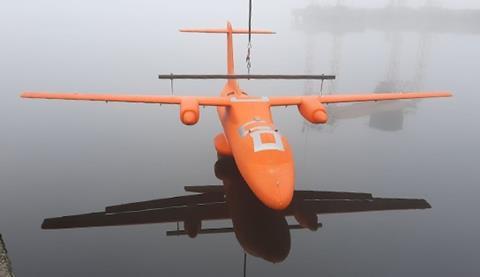 Various pitch attitudes and speeds were analysed during the testing

He says personnel mounted the model on the upper stage of a catapult, and adjusted such parameters as splashdown speed and pitch, before launching it.

Over 100 test launches of the TVRS-44 were carried out, across a range of scenarios.

“Such studies make it possible to obtain more reliable data in comparison with calculation methods,” says the institute.

Sensors fitted to the model, as well as video recordings, have enabled the researchers to determine the speeds and pitch attitudes at which the aircraft can perform the safest touchdown on both calm and rough water.

Serial production of the turboprop is intended to start in 2025.