Lack of checklist discipline left the pilots of a De Havilland Canada DHC-6-300 Twin Otter unware that the aircraft was carrying insufficient fuel, before it carried out a forced landing in a swamp while diverting.

The Air Tindi turboprop had been operating a domestic Canadian service from Yellowknife to Fort Simpson, with two pilots and three passengers on board, on 1 November last year.

Transportation Safety Board of Canada analysis indicates the aircraft had arrived at Yellowknife with around 533lb (241kg) of fuel.

It should have been refuelled at Yellowknife in order to have the 2,500lb (1,134kg) typically needed for the Fort Simpson flight.

It states that the fuel company contacted the flight co-ordinator to ask whether the aircraft required fuel, only to be informed that the aircraft had already departed for Fort Simpson about 3min before.

The safety board found the captain believed the aircraft had been fuelled because, upon entering the cockpit, he saw a pink fuel slip in the door and assumed it was a receipt for fuel he thought he had ordered.

But the slip was actually for a flight which had taken place three days earlier.

“[The slip] reinforced his belief that the aircraft had been fuelled for the last flight of the day when, in actuality, it had not been refuelled,” says the inquiry.

Investigators point out that the crew missed opportunities to detect this oversight as a result of slack checklist procedures. 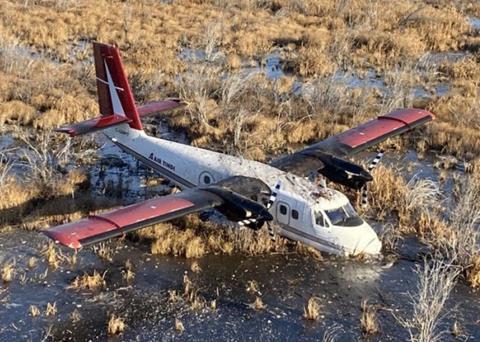 All five occupants survived after the Twin Otter, having exhausted its fuel, came down in a swamp

The captain had conducted the ‘before start’ check – using a flow scheme rather than a checklist – but became distracted by a conversation with a passenger he knew. This led the fuel-quantity check to be “missed”, says the inquiry.

It adds that the captain also carried out the ‘after start’, ‘taxi’ and ‘line up’ checks from memory.

Air Tindi procedures state that the verbal challenge-and-response, rather than memory, should be used for the most critical items, and that the ‘after start’, ‘taxi’, and ‘line up’ checks are among these.

Once the aircraft was airborne, the first officer completed ‘after take-off’ and ‘cruise’ checks without reference to the checklist.

The inquiry says this meant three separate series of checks – specifically ‘before start’, ‘taxi’ and ‘cruise’ – had been undertaken which should have included a fuel-quantity observation.

Fuel-burn analysis suggests a low-fuel caution light, for the aft fuel tank, would have illuminated about 25min after take-off.

At this point the aircraft would have had about 60USgal including a total of 17USgal in the auxiliary wing tanks – giving it about 40min flight time before exhaustion.

According to the inquiry, the crew noticed the caution light about 38min after take-off, when the aircraft was halfway to its destination, and immediately realised they had departed with insufficient fuel.

The pilots decided to divert to Fort Providence, to the south, and they were advised to shut down the left-hand engine to conserve fuel, which they did.

Power on the right-hand engine was reduced and the aircraft commenced a slow descent, but this engine flamed out from lack of fuel in the forward main tank when the Twin Otter was 11.8nm from the diversion airport.

Although it was flown in the best configuration for maximum glide distance, and glided for 5.1nm, the aircraft was unable to maintain sufficient height to reach Fort Providence, and the crew carried out a forced landing in a swamp, in darkness, 6.7nm north-west of the airport.

All the occupants survived and were rescued about 4h later, suffering from mild hypothermia. The aircraft (C-GNPS) was substantially damaged.

Air Tindi subsequently took several measures including emphasising to crews the need to follow all procedures and checklists, and requiring the captain to verify fuel uplift and sign an acknowledgement on fuel slips before engine start.