Iranian investigators have disclosed that two missiles from a Tor-M1 anti-aircraft system were fired before the loss of a Ukraine International Airlines Boeing 737-800 shortly after departure from Tehran.

The Civil Aviation Organisation states that secondary radar contact with flight PS752 was initially lost at 06:15, about 3min after take-off, as the aircraft climbed through 8,100ft having been cleared to 26,000ft.

But Mehrabad primary surveillance radar was able to continue tracking the aircraft as it made a right turn. The inquiry says this turn was “possibly towards the airport”, although it has not indicated whether the jet was under control or whether the turn was intentional.

After a further 3min of flight, at 06:18, radar contact was lost completely. The aircraft came down about 9nm north-north-west of the airport, carving a track on a heading of about 160° through an ornamental park and a football playing field as it disintegrated.

The inquiry says specific tests have been requested by investigators on aircraft components to explore any evidence of fuselage and other structural impact from a foreign object, in relation to the possible influence of “missile defence operations” on the accident.

Investigators have received information that two missiles from a Tor-M1 system – known to NATO as the SA-15 Gauntlet, and which uses a 9M331 surface-to-air weapon – were fired towards the aircraft from the north.

“The impact of these missiles on the accident and analysis of this action are under investigation,” the inquiry says.

It has detailed the preparations for the 8 January flight to Kiev, stating that the aircraft was replenished with 9,510kg of fuel.

But a load sheet calculation showed the maximum weight for the aircraft needed to be 72.5t, and that 82 items in the baggage hold – equating to 2,094kg of the overall 6,794kg of baggage – were offloaded in order to meet the criteria, bringing the 737’s weight down such that it was 32kg below the maximum.

This offloading resulted in a delay to the departure. The flight, parked on stand 116R, had been scheduled for 05:15 but the aircraft’s doors were not closed until 05:49. The inquiry says 167 passengers had boarded, with one no-show.

Shortly afterwards the aircraft was cleared for pushback and it eventually took off at 06:12 from runway 29R.

Mehrabad radar control, with which the airport tower had previously co-ordinated the flight, contacted the crew and cleared it to climb to 26,000ft. The departure route required the crew to perform a right turn after reaching 6,000ft and proceed direct to the waypoint PAROT located 75nm north-north-west of Imam Khomeini airport. The crew read back the instructions.

But from 06:18, says the inquiry, the radar controller informed the crew that he had lost contact. No response from the aircraft was received, and no transmissions were made from the crew indicating any unusual circumstances. 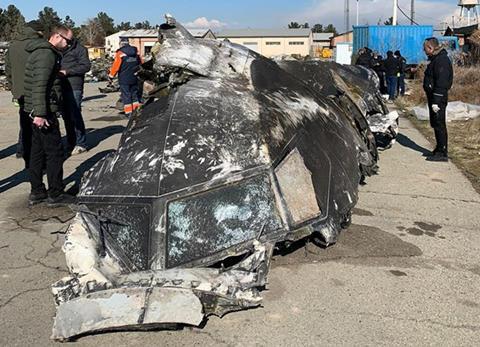 Among the 167 passengers were 146 with Iranian passports

Although one of the aircraft’s emergency locator transmitters activated, its antenna had become detached during the accident. Both flight recorders were retrieved, with their memory modules, but both sustained fire and impact damage.

Investigators state that a special task force, to explore unusual circumstances, has conducted tests for radiation and explosives. Analysis of luggage “reinforces the suspicion” that the presence of explosives should be probed.