Two crew members have been killed in a runway excursion involving an Angara Airlines Antonov An-24 which had attempted an emergency landing at Nizhneangarsk in southern Russia.

The twin-engined aircraft (RA-47366) had been transporting 43 passengers and four crew members from Ulan-Ude, as flight 2G200, on 27 June.

Angara Airlines says that, at 10:24 local time the aircraft conducted an emergency approach to Nizhneangarsk.

"During the landing, the aircraft rolled off the runway and collided with ground infrastructure," the airline says.

Video images purportedly taken during the landing indicate the aircraft veered off the right side of runway 22. The airport has a single runway, designated 04/22, which is some 1,600m in length.

Russia's emergency situations ministry for the Buryatia region says the aircraft struck a sewage-treatment plant after crossing rough ground and crashing through a fence. 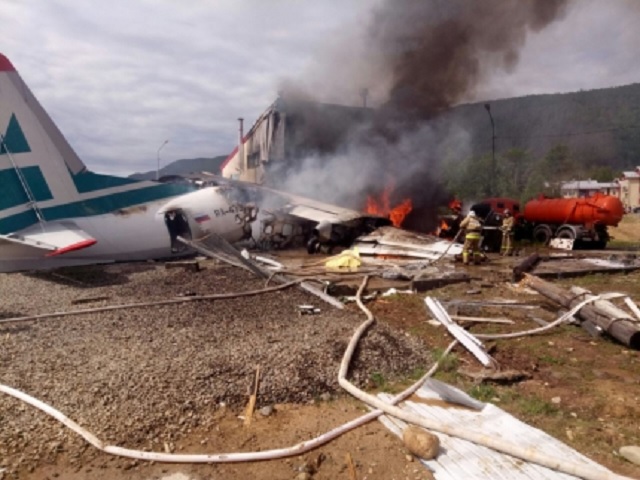 The carrier adds that a fire subsequently broke out and the An-24 was evacuated. While all the passengers survived, the aircraft's captain and a flight mechanic did not.

Angara states that the first officer and the aircraft's flight attendant were not injured.

It says the captain had logged just over 15,700h flight time, with the first officer had a total of 6,315h.

Firefighters extinguished the blaze at the treatment plant by 13:15, says the emergencies ministry.

No meteorological data is available for the airport but the video images indicate good weather and visibility.

Angara has about a dozen An-24s and An-26s in a regional fleet which also includes An-148 jets. The aircraft involved in the accident was originally delivered to Aeroflot in 1978 and transferred to Angara in 2013, according to Cirium's Fleets Analyzer.