Iranian president Hassan Rouhani’s statement of admission that the country’s defence forces shot down the Ukraine International Airlines Boeing 737-800 in Tehran, lacing humility with an air of political justification, will doubtless be compared and contrasted with the US response to the accidental destruction of an Iran Air flight in 1988.

Rouhani calls the loss of the Ukrainian aircraft a “disastrous mistake” after being informed of the outcome of an Iranian armed forces’ investigation into the 8 January crash.

But he also couches the statement with justification, pointing out that the incident took place in an “atmosphere of threats and intimidation” by an “aggressive American regime”, with its armed forces on “full alert” to protect against a possible US military offensive. 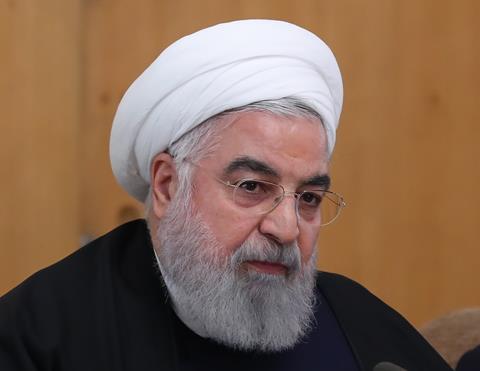 “[This] unfortunately led to this terrible catastrophe taking the lives of dozens of innocent people because of human error and mistaken shooting,” says Rouhani.

His statement is designed to offload some of the responsibility onto the US administration, and has parallels with US president Ronald Reagan’s response to the US Navy’s inadvertent missile attack on Iran Air flight IR655 in July 1988, an event which remains one of the most contentious in two sides’ fractious relationship.

The Airbus A300 was brought down in the Persian Gulf by the US warship USS Vincennes, whose crew – at a time of heightened tension and US-Iranian military skirmishes – had mistaken the aircraft for an inbound Iranian Grumman F-14.

Reagan stated, on the day the of attack, that the Vincennes had appeared to be undertaking a “proper defensive action” when he acknowledged that the Iranian airliner had been shot down over the Strait of Hormuz.

“This is a terrible human tragedy. Our sympathy and condolences go out to the passengers, crew and their families,” he said, promising a full investigation. “We deeply regret any loss of life.”

But Reagan continued with the justification angle. “The course of the Iranian civilian airliner was such that it was headed directly for the USS Vincennes, which was at the time engaged with five Iranian Boghammer boats that had attacked our forces,” he said.

“When the aircraft failed to heed repeated warnings, the Vincennes followed standing orders and widely-publicised procedures, firing to protect itself against possible attack.”

With the 8 January incident involving a Ukrainian flight, and Iranian passengers, the situation – while dire in its own right – is arguably less politically sensitive than it might have been if the Tehran attack had involved a US aircraft.

Having opened with defensive remarks condemning the US stance, Rouhani continues with considerable contriteness and even an initial apology for the situation.

Rouhani says the accident is “not something that can be easily overlooked”, adding that further investigation is necessary to identify its cause – and he also refers to prosecution of the “perpetrators of this unforgivable mistake” and the adoption of measures to address “weaknesses of the country’s defence systems” to prevent a repetition.

Ukrainian president Volodymyr Zelensky is insisting on an “official apology” from Iran, through diplomatic channels, for the incident, as well as a transparent investigation, repatriation of the victims, and compensation for the loss.

“Iran has pleaded guilty to [destroying] the Ukrainian aircraft,” he says. “But we insist on full admission of guilt.”