UK regulators have withdrawn an operating ban on Pratt & Whitney PW4000-powered Boeing 777s, two months after it was imposed following the serious engine failure on a US aircraft.

The operational restriction was introduced on 22 February.

Two days earlier a United Airlines 777-200 suffered a fan-blade fracture over Denver which resulted in substantial destruction of the powerplant.

This incident bore strong similarities to an incident on 4 December last year involving a PW4000-equipped Japan Airlines 777. Investigators had also previously inquired into a February 2018 blade-related event which occurred to another United 777.

The UK CAA says it is revoking the restriction on the 777s effective 28 April.

“Its purpose will be achieved through compliance with the mandatory requirements of associated [US FAA] airworthiness directives before further operations are conducted with these [aircraft],” it states.

The authority had said the measure was precautionary and would remain until appropriate safeguards were in place. 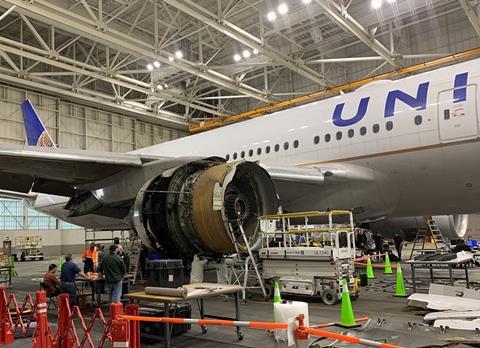 US regulators ordered urgent inspections after the United 777 engine failure