US investigators are examining a United Airlines Boeing 737 Max 9’s flight-management computer after an incident in which the system’s displays apparently blanked before the aircraft inadvertently landed on the wrong runway at Pittsburgh.

The crew had needed to input a number of amendments into the flight-management computer during the short service from Chicago O’Hare on 21 June, owing to arrival runway changes.

Initially the crew expected an area navigation approach to Pittsburgh’s runway 28C, and fed this information into the computer before reaching top-of-descent.

But approach controllers subsequently informed that they were likely to be vectored for a visual approach to runway 32, and programmed the flight-management computer with the ILS approach to this runway as a back-up.

As the jet descended through 4,000ft the crew indicated that the computer briefly displayed a “check landing altitude” message, says the National Transportation Safety Board in a preliminary bulletin.

After the message disappeared, it adds, the aircraft reverted to ‘control-wheel steering’ pitch mode – an autopilot mode which enables the pilot to use the control wheel – rather than turn mode-control knobs – to change attitude. The crew then selected ‘level change’ and reselected ‘command’ mode for the autopilot.

The aircraft began descending and, during this period, the crew was asked if they could accept a visual approach to runway 28C, and the flight-management computer was reprogrammed with the area navigation approach to 28C as back-up. 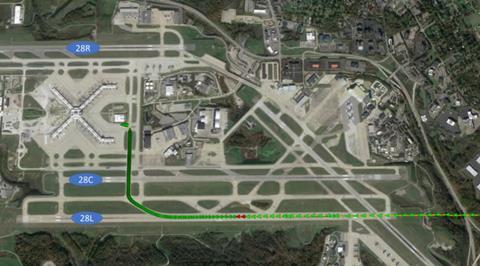 Upon contacting the local controller at a distance of 6.5nm east of the airport, the crew advised they were on a visual approach to 28C and were cleared to land.

But about 2nm from the waypoint SUPPR – the final approach fix, located some 5.6nm before the runway – both flight-management computers “blanked” and the “screen was black”, according to the captain, other than a prompt for the ACARS addressing system.

The captain used ‘heading select’ and ‘level change’ on the mode control panel, says the inquiry, but when the aircraft joined final approach at about 6nm it was aligned with runway 28L, which runs parallel to, but 370m south of, runway 28C.

At about 2nm distance – and still aligned with 28L – the crew requested verification of the landing clearance, and this was given by the controller. The aircraft landed on the wrong runway, although without further incident, vacating to taxiway F5.

According to the inquiry, the controller had noticed the misalignment just before touchdown but decided that, given the aircraft’s height, allowing it to land was “more appropriate”. Traffic volume was light at the time. None of the 174 occupants was injured and the jet (N37513) was undamaged.

Investigators subsequently removed the flight-data recorder from the aircraft for analysis, and one of the flight-management computers was also taken for examination.