US legislators have unveiled a proposed overhaul of aircraft certification intended to reform and reinforce the process in the aftermath of the fatal accidents involving the Boeing 737 Max.

The bipartisan bill has been submitted jointly by two Democrat and two Republican representatives, including chair of the House Committee on Transportation and Infrastructure Peter DeFazio.

Human factors analysis forms a key section of the bill, requiring that the US FAA evaluates methods to support human-factors assessment and develop a framework to “better integrate” human factors considerations throughout the certification process.

This should be done, it says, with the objective of improving safety by “designing systems and training pilots in a manner that accounts for contemporary knowledge”, to reduce the possibility of an accident resulting from pilot interaction with the aircraft. 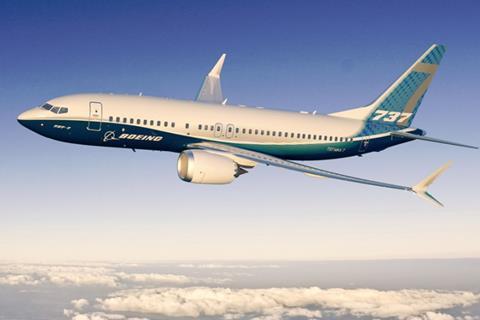 Boeing and the FAA had been heavily criticised for approving the controversial MCAS control system, designed to lower the 737 Max’s nose upon detection of a high angle-of-attack. Investigation of both the Lion Air and Ethiopian Airlines 737 Max accidents showed the crews struggled to cope with the system’s behaviour and counter MCAS’s nose-down commands when it received false angle-of-attack data.

Under the proposed legislation, the FAA shall require airframers to provide it with findings and information necessary for crews to be trained on cockpit systems.

The FAA must not only ensure that this information “adequately includes” consideration of human factors, but that each airframer “identifies any technical basis, justification or rationale” for its findings.

Safety-critical data must be submitted to the regulator covering details of any system which “commands the operation” of a safety feature for aircraft control, or otherwise alters the aircraft’s airspeed or flightpath, “without being commanded by the flight crew”.

This aspect of the proposal also covers any failure or operating conditions which could result in a hazardous or catastrophic outcome, and any adverse handling quality that would not meet regulatory standards without the addition of software to augment the flight controls.

When establishing any pilot-training requirements, the bill says, the FAA must “independently review” any proposal from the airframer regarding the “scope, format or minimum level” of training necessary to operate the aircraft.

Type certification will not be granted unless the applicant has accounted for “realistic assumptions” with respect to pilot-response times under abnormal conditions, backed up by scientific human factors research, in the design of instrumentation.

Airframers will not be permitted to make any assurances, or provide financial incentives, to potential customers in relation to pilot training for a new aircraft before the FAA has established training requirements.

The proposed legislation states that the FAA will initiate a safety review of assumptions relied upon during aircraft design, including analysis of any possible effects on “pilot competency in basic manual flying skills”.

This review will also consider the global nature of the air transport market and the “varying levels” of pilot competency, as well as differences in pilot training programmes. The FAA should also initiate a “call to action” to bring stakeholders together to discuss relevant best practices and implement actions to address safety issues.

Under the bill the FAA would have to rethink its assumptions when granting type certification to derivative designs, to establish the extent to which certain revisions and enhancements – such as a new flight-control system, or changes to aerodynamic stability requiring software updates – might preclude the issue of an amended certificate.

US aircraft and aerospace manufactures will have to adopt safety-management systems and reporting programmes for personnel.

Penalties for regulatory violations will be strengthened, while the bill would extend whistleblower protection to allow employees to report safety concerns without fear of reprisal.

DeFazio says he was “alarmed and outraged” by the recently-published findings from the House Committee’s investigation into the 737 Max certification.

But he adds: “I believe history can also show this was the moment Congress stepped up to meaningfully address the gaps in the regulatory system for certifying aircraft and adopt critical reforms that will improve public safety and ensure accountability at all levels.”