US commercial carriers have been banned from operating within Afghanistan’s airspace, in a further tightening of restrictions following the deterioration of the country’s political stability.

Afghanistan’s airspace was already the subject of limitations and advisories from the US FAA and several other civil aviation authorities, including those in Germany, France and the UK.

These limitations required aircraft to maintain a certain minimum altitude while overflying Afghanistan, although French civil aviation regulators have recently issued an advisory in which French carriers and crews are “requested to avoid” the Kabul flight information region – the airspace which covers the entire territory of Afghanistan

The FAA, however, has issued a security NOTAM stating that all US carriers and commercial operators are “prohibited” from flying within the Kabul FIR.

Only a short sector within eastern Afghan airspace – a 12nm segment connecting airways P500 and G500, between Pakistan and Tajikistan – is permitted for transit.

The FAA cites the “risk posed by extremist [or] militant activity”, disruption to air traffic services, and “limited” risk-mitigation capabilities. 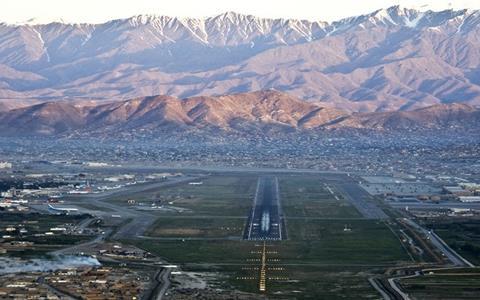 Commercial pilots had already warned that, in the aftermath of the US military withdrawal from Afghanistan and the political takeover by Taliban forces, airspace over Afghanistan was effectively uncontrolled.

Although the FAA order applies to US-certified pilots and US-registered aircraft, it does not cover US crews and aircraft operating for foreign airlines.

US military aircraft are exempt from the ban.

The prohibition does not apply to aircraft operating specifically to Kabul’s capital airport, Hamid Karzai International, in accordance with the prior-permission process and taking into account limitations such as fuel availability.

But aircraft must “minimise” time spent within Afghan airspace at altitudes below 26,000ft and should maintain 5,000ft above ground “to the maximum extent possible” when not in contact with air traffic control.