US investigators probing a fatal mid-air collision between two light aircraft at North Las Vegas airport are trying to ascertain why both appeared to be on the approach path to the same runway.

Runway 30R is the shorter of the two but its threshold is located ahead of that for 30L.

Its pilot then contacted the airport tower, informing that the aircraft was set to cross the airport midfield for a landing on 30L. The controller responded “continue for 30L”, and this was correctly read back. 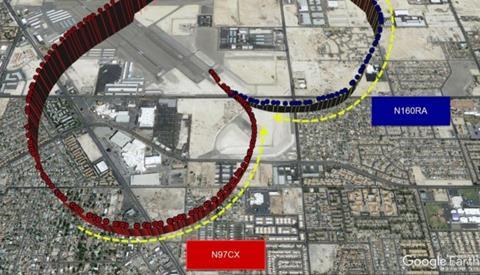 Shortly afterwards the tower controller cleared a Cessna 172 – flying a right-hand pattern for the parallel 30R, with an instructor and student pilot on board – for a “short approach” to the runway.

The Piper was then cleared to land on 30L, and its pilot read back the correct clearance, according to preliminary information from the National Transportation Safety Board.

This was followed by an exchange in which the controller appeared to reiterate the runway clearance.

No further transmissions were received from either aircraft.

But US FAA tracking data from ADS-B transmissions indicate that, while the Cessna correctly lined up with 30R, the Piper flew beyond the approach path to 30L and into that for 30R.

None of the four occupants survived the collision. 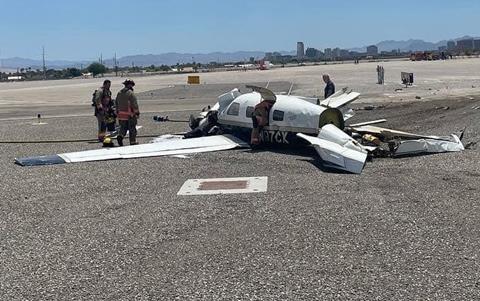 Wreckage of the PA-46 following the mid-air collision

Wreckage of the Piper showed its right wing sustained an impact separation, with crush impressions to the leading edge about 2.5ft outboard of the wing root, containing flakes of green primer.

About 4ft of the Cessna’s left wing, including its aileron, was found separated from the main wreckage, and the debris showed blue paint transfer.

The inquiry identifies the Cessna as N160RA and the Piper as N97CX.

Investigators have yet to reach formal conclusions on the cause of the accident. Visibility and weather conditions at the time of the collision, shortly after noon, were good.