US safety regulators have adopted a controversial rule aimed at modifying early Boeing 777s to reduce the risk of a centre fuel-tank explosion, having dismissed multiple objections by foreign operators of the type.

Part of a long-running FAA effort to reduce the risk of fuel-vapour explosion across a range of aircraft types, the proposal to modify the fuel-quantity indicator system of 777-200s and -300s – or re-route wiring in cargo versions – had been badly received by several high-profile overseas carriers.

The FAA claims the indicating system design has “potential for latent faults”, with closely-bundled wiring, and poses the threat of arcs or sparking – with a possible ignition of fuel vapour under particular conditions.

US operators are already required to fit flammability-reduction systems to passenger 777s, but the FAA intends its rule to apply to foreign-operated aircraft as well – even though other regulators, including the European Union Aviation Safety Agency, have chosen not to mandate a similar retrofit.

In remarks filed after the original rulemaking was put forward, KLM said it had “great concerns” over the proposal, believing that even Boeing is “not able to explain or substantiate” the rationale behind it – a view echoed by Emirates.

KLM said Boeing had informed the carrier that the sole means of compliance was to fit a nitrogen-generating system to inert the tank, placing a “huge financial burden” on the airline.

But KLM successfully convinced the FAA to limit the directive to 777s with line numbers up to 561, having argued that subsequent aircraft featured improved wire separation.

Cathay Pacific opined that the US side should “align” with EASA’s stance of not mandating retrofit of flammability-reduction systems. 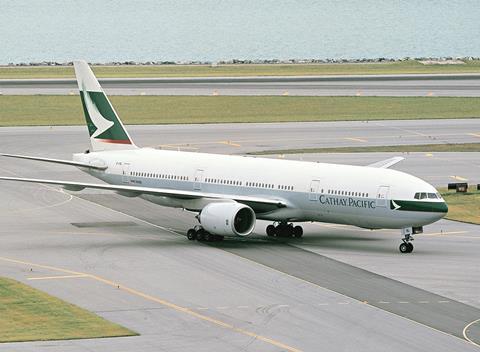 The Hong Kong-based operator suggested that Boeing considered the nitrogen-generating system to be optional and that the design of the 777’s fuel system had “already reached the acceptable level of safety”.

“This potential [directive] will add a huge maintenance burden and financial burden to Cathay,” it stated in a formal comment over the proposal, noting that the modification involved a weight penalty.

British Airways and Korean Air had been among the 777 operators pressing for an alternative solution from Boeing, which would have less impact, and BA sought dispensation for aircraft retirement. Singapore Airlines also believed the determination of risk level should take into account the remaining operating life of the 777 fleet.

Adoption of the rule by the FAA has taken more than four years since it was initially published, and the air transport crisis resulting from the coronavirus pandemic is likely to reduce the number of 777s covered by the directive. The FAA believes British Airways, for instance, no longer operates any affected aircraft.

Boeing views as a “final corrective action” the use of nitrogen-generation systems to address unknown ignition sources, and insists the lack of US-European harmonisation on the flammability-reduction rule should not generate additional work and expense for airlines.

But the FAA rejected Boeing’s argument that “no unsafe condition” exists – and the airframer’s request to withdraw the directive – ruling that it believes there is a risk, based on decision criteria from 2003.

The FAA’s says its determination is not based on an assessment of average risk or total fleet risk, but rather the “qualitative identification” of an unacceptable level of individual risk on flights anticipated to take place with the combination of the latent condition and a flammable centre tank.

It adds that it considers operation of flights which are vulnerable to a “potentially catastrophic single-failure condition” to be an “excessive safety risk”.

Boeing had asked for the proposal to be revised, to allow the re-routing and separation of wiring within cargo aircraft as a means of compliance for passenger aircraft as well.

But the FAA says that it is only “willing to accept a higher level” of individual flight risk for cargo aircraft, owing to the absence of passengers. It does not consider the wiring re-route to be sufficient for passenger flights.

One of the few concessions the FAA has granted, in a final rule which becomes effective on 26 October, is to extend the compliance interval from 60 months to 72 months – a measure which had been requested by Japan Airlines and others.