Investigators have determined that snow-clearance at Usinsk airport was inadequate before a landing accident in which a Utair Boeing 737-500 struck a shallow snow bank, about 1.1m high, situated 32m before the runway.

The inquiry has also revealed that the aircraft was consistently slightly low on its descent path during the approach.

Flight UT595 had been inbound from Moscow Vnukovo on 9 February and, while the weather at Usinsk had appeared marginal, the crew opted not to divert, in the belief the conditions would improve.

This required passing the GIGES waypoint, following a heading of 021° to the YS001 initial approach fix, then turning right to intercept intermediate fix YS004 and then YS005 on the inbound approach path to runway 13.

After passing the transition altitude the crew set the altimeter to the QNH level of 999mb.

But when the aircraft reached YS001, crossing it in a right turn, it was flying at 2,210ft – slightly below the 2,240ft QNH height listed on the chart.

The crew received a weather update confirming the runway visibility was sufficient to land, and proceeded to pass the YS004 point at 2,200ft, again below the 2,240ft listed.

Investigators state that the first officer then referred to a descent altitude of 1,500ft as the aircraft headed for YS005 – which has a QNH height requirement of 1,570ft – and passed it at 1,530ft.

During the descent the captain, who had remarked about the “whiteness” of the snow-covered ground, also expressed concern about the wind before configuring the aircraft with a flap setting of 30.

But the inquiry says the wind speed gradually fell from 40kt to 14kt as the aircraft descended and there was no alert over sudden wind changes.

Cleared to land, and with the runway in sight, the aircraft flew over both the outer and inner marker beacons at heights some 40-50ft lower than required.

The pilot did not mention the heights over the markers but the first officer cautioned the captain to avoid descending below the glidepath, and warned again as the aircraft reached 100ft.

Engine thrust was increased, causing a slight increase in pitch, but this was countered by a push on the control column. The inquiry says that, below 50ft, no actions were taken to reduce the descent rate. 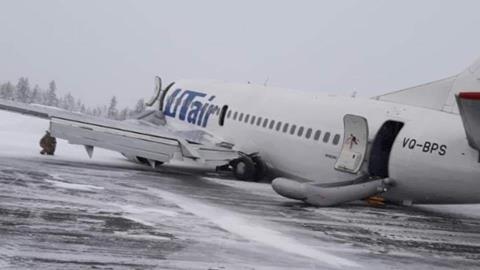 Both main landing-gear assemblies were badly damaged by the impact

The aircraft struck a 1.1m bank of snow, located 32m before the runway entrance, while travelling at 138kt and pitched 3° nose-up.

It then touched down with a 1.86g impact, its right-hand main landing-gear shearing off while the left-hand assembly collapsed, causing the jet to settle onto its engines and aft fuselage underside.

The crew apparently was not aware of the damage to the undercarriage, because the captain ordered reverse-thrust and speedbrake deployment before finding that the braking and nose-wheel could not be controlled.

It slid to a halt, spinning 80° clockwise relative to the centreline. None of the 100 occupants was injured.

Investigators have yet to reach formal conclusions on the cause of the accident. But the inquiry points out that the winter preparations of Usinsk airport were not in line with regulations, with snow clearance “not fully carried out” in the area of the entrance to runway 13.