One of Russian carrier Utair’s Boeing 737-500s has been evacuated after it suffered a landing accident on a wintry runway in Russia’s Komi republic.

The aircraft (VQ-BPS) had been operating the UT595 service from Moscow Vnukovo to Usinsk airport on 9 February.

Utair says that a “sharp, unpredictable windshear” occurred during the landing, and that the landing-gear collapsed while the aircraft was on the runway.

“Owing to the prompt and highly professional actions of the crew, the aircraft was able to be kept on the runway until it stopped completely,” the airline says.

It says the crew was “experienced”, with the captain having logged 6,900 hours on type and the first officer 3,600h. Ninety-four passengers were on board, one of whom sought medical attention for a minor injury.

“Utair specialists have flown to Usinsk to analyse flight information and determine the causes of what happened,” the carrier says.

Images on social media purporting to show the scene indicate the aircraft’s main undercarriage sustained a collapse and the 737 came to rest on its engines on a heading perpendicular to the runway. Slides were deployed to evacuate passengers.

The airport has a single runway designated 13/31.

NOTAM data from the Russian aeronautical information publication, valid on 9 February, states that the ILS glidepath and the approach lighting for runway 13 are unserviceable.

Meteorological data for Usinsk airport is unavailable but wintry conditions including snow were clearly present at the time of the accident, around 12:45.

Russia’s federal Investigative Committee says six crew members were also on board. ”Steps are being taken to establish the circumstances of the aviation incident, as well as the causes and conditions,” it says, adding that a routine criminal probe has been opened. 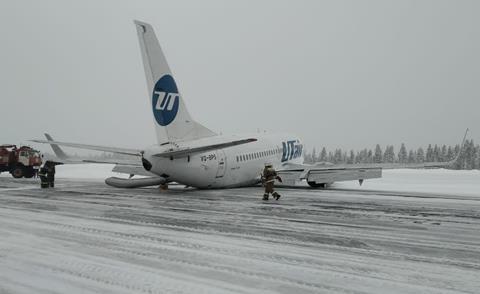