Attempts to rectify a fault led to the loss of pressurisation and the temporary incapacitation of the crew operating a Qantas Freight Boeing 737-300F freighter.

The incident involved aircraft VH-XMO (MSN 23488) that was operating the Brisbane-Melbourne route on the evening of 15 August 2018, according to the Australian Transport Safety Bureau (ATSB). The aircraft is operated by Express Freights Australia, a unit of Qantas Group. 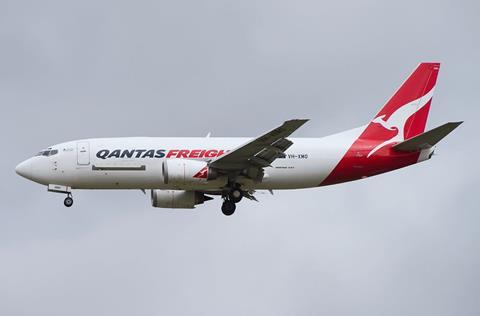 According to ATSB, VH-XMO was delivered as an airliner in 1987, and was later converted into a freighter. Express Freighters Australia operates four 737-300Fs

During the flight, the master caution and a right wing-body overheat annunciator illuminated, and the crew actioned a non-normal checklist.

“An additional fault with an isolation valve in the aircraft pressurisation system prevented isolation of the right wing-body pressure duct,” says the ATSB.

“This led the crew to conduct further troubleshooting during which the cabin air supply was reduced. In conjunction with a higher than normal cabin leak rate, the reduced airflow also lessened the cabin pressure.”

The crew donned their oxygen masks and started to descend. The captain, however, selected ‘emergency flow’, which resulted in temporary incapacitation.

“MAYDAY was declared by the first officer and the aircraft was diverted to Canberra Airport, Australian Capital Territory,” states the ATSB.

“During the diversion, the first officer also experienced incapacitating symptoms,” says ATSB. “The aircraft landed at Canberra Airport, under the control of the captain, with no further issues.”

The event highlights the “hazards of dealing with system malfunctions that are not fully resolved using the approved non-normal checklist procedures”.

The ATSB, which categorised the incident as serious, also warned flight crews about the possibility of misusing emergency equipment in non-normal situations, noting the pilot’s incapacitation when he donned his oxygen mask.

The ATSB was also advised that safety action implemented by Express Freighters as a result of those aircraft inspections included:

Express Freighters Australia have also amended their policy for system failures and in-flight troubleshooting, advising the ATSB that the following amendment has been incorporated into their Flight Administration Manual: