French investigators have determined that confusion in locating a VOR radial led the crew of a navaid calibration aircraft to stray twice into close proximity with a separate calibration flight in the vicinity of Paris.

Both aircraft were Beechcraft King Airs operated by the Ecole Nationale de l’Aviation Civile on 17 April 2019.

One of them (F-HCEV) was due to take off from Paris Le Bourget’s runway 21 to check a standard departure procedure which used the 086 radial of L’Agile VOR, located 75nm to the west.

The calibration engineer’s manual plot placed this radial north of a prohibited airspace zone for Paris. But owing to the zoom scale on the cockpit display, the pilots – when entering the standard departure and the radial into the flight-management system – did not notice that the radial was actually further south and passed through the restricted zone.

French investigation authority BEA states that, after take-off and while flying west, the pilots noticed the inconsistency and sought clearance to head south to intercept the radial.

Although the flight was under instrument rules, the air traffic controller instructed the crew to visually track a ring road and find the best heading to start the calibration – believing the pilots would continue flying west in compliance with the standard departure pattern. 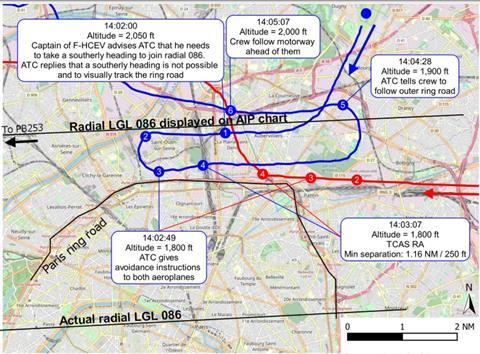 But BEA says the captain “interpreted differently” this instruction and turned left, ultimately heading east and converging at 1,800ft with the other calibration aircraft (F-HNAV) which had been assigned to calibrate two new ILS for Paris Charles de Gaulle airport’s runway 08R/26L.

Their proximity triggered a collision-avoidance resolution advisory, even though the controller – in contact with both aircraft – had attempted to vector them away from one another.

BEA says the crew assigned to check the radial had given priority to taking the measurement, at the risk of deviating from the standard departure pattern.

It adds that the pilots might have been “unsettled” by the change in navigation mode, from following a standard instrument departure to acquiring and tracking ground references.

The controller vectored this aircraft to head west and again told its crew to track the ring road but the pilots misidentified the road, instead following a highway in front of them which led north-west.

This flightpath resulted in its closing-in again on the other calibration aircraft which had turned towards the north-west during the previous encounter. The controller twice ordered the first crew to turn left to the west to resolve the loss of separation. This second incident did not trigger a collision-avoidance alert. Such was the controller’s concern over the “erratic” behaviour of the aircraft, says BEA, that he asked its crew to stop the calibration work and return to Le Bourget. But after a number of discussions the crew was permitted to continue its measurement programme, which included supporting commissioning of a new DME associated with the L’Aigle VOR.

BEA says its analysis was limited by the non-preservation of cockpit-voice recorder information from the aircraft.

Various elements contributed to the incident, it states, including the error in the published procedure on the radial to be tracked and the crew’s not checking the consistency of the radial position provided by the calibration engineer.