Spanish carrier Vueling has amended simulator training to include high-energy approaches and go-arounds, after investigators probed an Airbus A320 incident at Birmingham which involved two aborted approaches and triggering of angle-of-attack protection.

The crew had struggled to reduce the aircraft’s speed after commencing the final stages of the area navigation approach to runway 33, says the UK Air Accidents Investigation Branch.

It adds that differing depictions of the descent profile on the airline’s charts confused the pilots, causing them to delay a descent from 4,000ft to 2,000ft and request clarification of the descent clearance from air traffic control.

This exacerbated the issue of late configuration and deceleration and left the A320 high on the approach, and eventually prompted the crew to execute a go-around at 470ft, when the jet was 0.3nm from the threshold.

The captain took over from the first officer as the flying pilot and sought a localiser/DME approach for a second attempt. 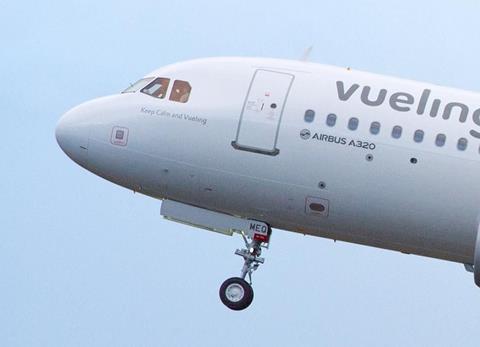 When the A320 was travelling the base leg, it was cleared to descend to 2,000ft, but the crew erroneously referred to 3,000ft during the read-back – a slip not corrected by the controller.

It only started to descend from 3,000ft when 7nm from the runway, and it was still 200ft above the correct profile at 5.1nm.

The crew realised the aircraft was too high and aborted the approach again, turning left and selecting a climb to 4,000ft.

Instead of using go-around power the crew left the aircraft with full flaps deployed and its landing-gear down, carrying out the missed approach in different modes, including ‘open climb’ and ‘vertical speed’.

But as its airspeed increased, the captain set the thrust levers to prevent its exceeding limit speeds for full flaps, and the A320 continued to descend to about 940ft above ground before the crew – after instruction from controllers – selected a vertical speed of 900ft/min and climbed away.

It carried out a third approach to the airport, this time landing without further incident.

Investigators state that visual conditions prevailed and that the captain – in a bid to avoid alarming the passengers – might have been attempting to reposition visually for the third approach, which could have explained why the A320 was not reconfigured for a go-around and why full thrust was not selected.

“The result was both a further descent and increase in angle-of-attack which [activated] the aircraft’s ‘alpha floor’ protection system,” the inquiry says.

“Even when the climb was initiated, the crew continued without changing the aircraft’s configuration, indicating the startle and high workload likely to arise from this unintended situation.”

The inquiry states that the approaches could have been completed safely and successfully from the point of original clearance.

But it points out that the captain chose to change the type of approach – from area navigation to localiser/DME – which put additional pressure on the pilots to set up the aircraft and re-brief.

“Positioning the aircraft further from the airport before commencing the subsequent approach would have allowed the crew more time to prepare,” it adds.

Vueling’s measures in response to the incident include a review of approach intercept procedures to ensure they make sufficient provision for approaches without a glideslope, and the introduction of procedures to help pilots to estimate distances to run.