The turboprop freighter (SE-MAO) had been bound for the neighbouring island of Guernsey on 18 August.

After levelling at 2,000ft on a north-west heading, it had entered a right turn when the crew felt a jolt followed by a sharp 5° roll to the left. The aircraft then rolled sharply left again, by 10°. Both rolls had been preceded by rapid aileron deflection in the correct sense, and no turbulence was present.

Its autopilot – the No 2 system – disengaged automatically, as designed, but the inquiry could not find the specific reason because the autopilot computer did not record a fault log.

As the first officer took manual control, and attempted to continue the right turn, she found the aircraft “pushing to the left”, says the Air Accidents Investigation Branch. 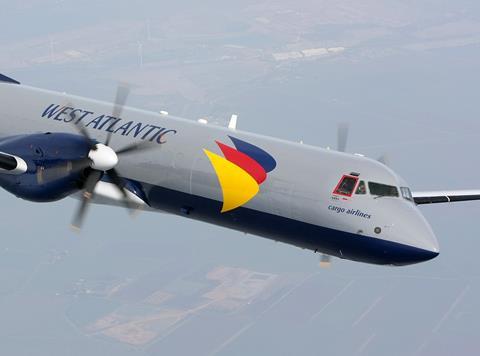 The crew was allocated vectors to prolong the flight for diagnosis, and slowed to 180kt which reduced the abnormal forces. The captain similarly experienced the control problem from his side, describing the aircraft as manageable but “need[ing] a lot of right input”.

After discussing the situation the crew opted to proceed to Guernsey where it landed 14min after departure.

“No anomalies were found in the aileron control system and the ailerons, balance tabs, and trim worked normally,” says the inquiry. If the aileron servo clutch had not de-energised after autopilot disconnection, it adds, this should have produced resistance in both control-wheel directions.

Although the servo was found to have overrun its 4,500h maintenance overhaul limit by 180h, the inquiry says it was dismantled and tested but no evidence was found of any fault.

“The reason for the increased force to turn the control wheel could not be established,” it adds.

Nor could investigators find a reason for a failure of flight director modes during the approach to Guernsey.

While localised corrosion was discovered on circuit boards linked to the autopilot servo, the inquiry says there was no evidence to link it to the incident.

West Atlantic replaced several components as a precaution, even though the investigation could not identify the source of the roll and the subsequent control difficulties.

Component testing found no anomalies that could be definitively associated with the incident, although it did identify issues relating to equipment maintenance and testing,” says the inquiry, pointing out that the carrier has since addressed these through safety actions. No recurrence has been reported since the aircraft returned to service.