Although the ATP, arriving from Guernsey on 22 May last year, carried out an initial crabbed approach to runway 33 in windy conditions, the crew did not discuss the “challenging” situation, says the UK Air Accidents Investigation Branch.

The first officer closed the throttle levers he had started to open for the go-around and the ATP touched down with its nose 20° nose left of the runway direction, without sufficient corrective rudder input.

It drifted from the centreline and the captain then called for a go-around, which was successfully executed.

“Reversing a decision having started a go-around places an aircraft at significant risk,” the inquiry points out. “Applying power during the landing roll invalidates any landing performance calculation, and a breakdown of crew co-ordination can create significant confusion on the flightdeck.”

The crew performed a second approach to the same runway, with the first officer requesting that the captain fly the aircraft this time. Wind conditions were 14kt, gusting to 27kt, from 230°.

Investigators found the aircraft flared without being lined up with the runway, and it touched down with its nose 20° left of the runway heading.

As a result it began to drift towards the left edge of the runway once it settled on its landing-gear, the situation exacerbated by the weathercock effect of the crosswind and insufficient right rudder. 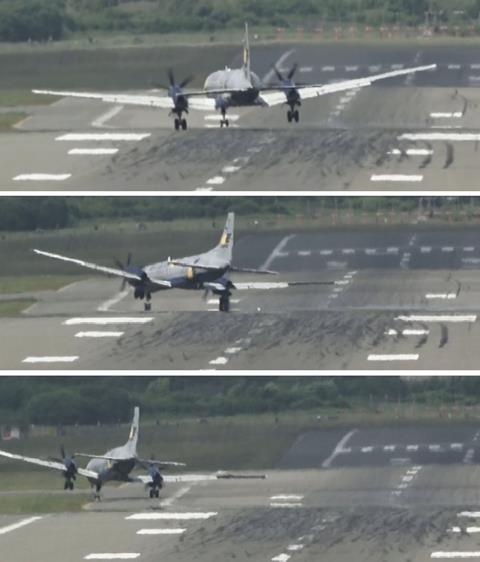 The captain did not apply the technique of using left aileron to counter the crosswind but, as the ATP headed for the runway edge, a full right aileron input – possibly a subconscious reversion to a natural steering reflex – caused the left-hand main landing-gear to lift off the ground and the aircraft travelled off the left runway edge about 5s after touchdown.

It remained off the runway for about 14s, rejoining after about 450m. The inquiry says the hard ground, owing to lack of rain, was “fortunate” because the aircraft remained undamaged with the two pilots – the only occupants – uninjured.

“Neither attempt at landing used the crosswind technique as laid down in the manufacturer’s and operator’s manuals,” says the inquiry, adding that “inexperience” with landing in such conditions contributed to the misaligned touchdown.

Investigators noted that the carrier, at the time, had no restrictions on the crosswind limit for either newly-qualified crew members or inexperienced first officers. Pilots were restricted only by the ATP’s certified crosswind limit of 34kt.

West Atlantic subsequently introduced a crosswind limit for new first officers over their first year of operation, as well as recurrent crosswind training for simulator sessions across its fleet.