WestJet 737 overrun crew did not anticipate tailwind from runway change

Canadian investigators believe a WestJet Boeing 737-800 overran at Halifax after its crew failed to realise that a landing runway change would result in a tailwind, rather than a crosswind, during the approach.

The tailwind component exceeded the operator’s limit of 10kt and required a lower approach speed, says Transportation Safety Board of Canada.

Its analysis found the aircraft, arriving from Toronto on 5 January last year, touched down on the wet, snow-covered runway 14 at 173kt groundspeed, about 1,200ft from the threshold.

Although the speedbrakes and thrust-reversers deployed and the autobrake system activated, the crew observed that the aircraft was not decelerating as expected and applied manual braking.

Efforts to slow the aircraft sufficiently to make a taxiway turn were unsuccessful and it overran at 26kt, coming to rest on grass 300ft beyond the runway. 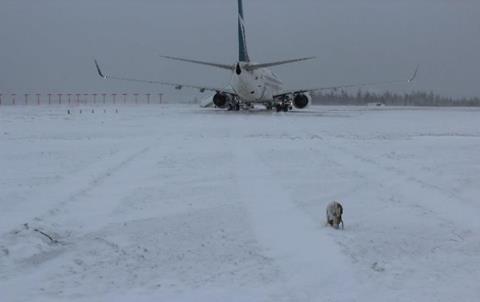 Its crew had originally prepared for an approach to runway 05. Wind conditions at the time would have resulted in a headwind component of 22kt. The crew calculated a target approach speed of 162kt and a required landing distance of 7,234ft.

But 14min before landing the pilots were advised of a change in the cloud ceiling, putting it below the minima for the runway 05 approach, and they requested an ILS approach to runway 14 instead.

“While preparing for the runway change, the flight crew members mentally assessed that the wind for runway 05 would result in a crosswind for runway 14 because the runways were perpendicular to each other,” says the inquiry.

“This mental model was likely a natural response by the flight crew to reduce cognitive effort during a time of high workload.”

But the gusting winds on the ground had backed – shifting from 030° to 020° magnetic – and increased slightly during the flight’s progress.

This resulted in a tailwind component of 15kt for runway 14, which went unnoticed by the pilots who did not revise their target approach speed or request new data over the ACARS communication system.

At the time the crew requested the change of runway, the approach speed selected would have required a landing distance of 9,810ft for runway 14, according to Boeing calculations – a figure in excess of the distance available.

While runway 05 was 10,500ft long, the length of runway 14 was only 7,700ft. The inquiry says the appropriate target approach speed should have been 152kt, but points out that the tailwind still exceeded the carrier’s limitations.

Wind information was “not salient” to the crew during the approach, it says, following the decision to change runways and the failure to recognise the tailwind.

“The unchanged target approach speed combined with the tailwind resulted in the aircraft crossing the threshold 10kt faster than recommended and touching down at a faster groundspeed,” the inquiry concludes.

None of the 178 occupants was injured and the aircraft (C-FUJR) was undamaged, although WestJet replaced the tyres and brakes before returning the jet to service.