Investigators are examining the reasons for a wheel detachment from an ATR 42-300 freighter as it departed from Chittagong in Bangladesh.

The aircraft involved was operated by local carrier Nxt Air under the Hello Air brand.

It was conducting a domestic ferry flight from Chittagong’s Shah Amanat airport to Cox’s Bazar on 5 June.

The turboprop took off from runway 23 but, according to French investigation authority BEA – which cites its Bangladeshi counterpart – the outboard left-hand wheel detached from the axle.

It was later discovered near the end of the opposite-direction runway 05.

Chittagong’s tower informed the crew and the aircraft continued to its destination, where the ATR carried out a couple of low passes for visual inspection before landing safely.

According to Cirium data, the airframe (S2-AHI) is almost 30 years old, having been delivered originally to Croatia Airlines as a passenger aircraft in 1993. 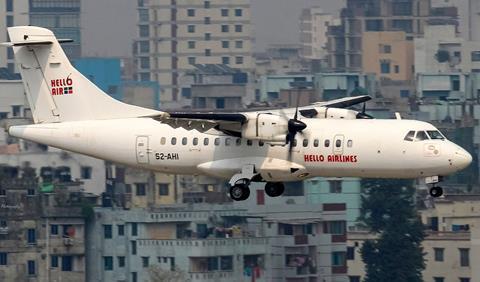 According to BEA identifies the aircraft involved as S2-AHI