South African investigators have found that the student pilot of a Piper PA-28 turned in the wrong direction after an air traffic control instruction, flying just 100ft directly above a Boeing 737-400 on approach to East London airport.

The student was conducting a solo navigation flight on 25 August, from Port Alfred to East London where he intended to carry out two touch-and-go landings.

He approached the airport from the north and turned right to join the downwind leg for runway 11, flying close to the extended runway centreline, says the South African Civil Aviation Authority’s accident investigation division.

At the same time a Safair 737-400 arriving from Cape Town was established on the ILS for runway 11, and air traffic control instructed the PA-28 pilot to turn right, to keep the light aircraft to the north of the 737’s approach path.

But the student pilot “misunderstood” the instruction, and did not read it back correctly, turning left instead of right, says the inquiry in its preliminary findings. This took the PA-28 directly into the 737’s path. 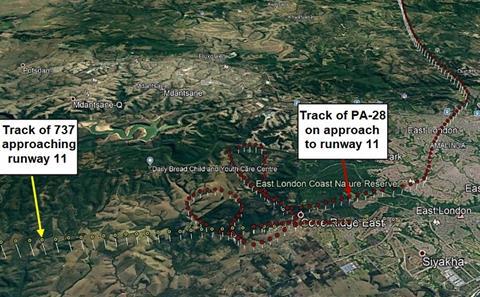 The 737 crew was cleared to land but subsequently asked the controller whether he was aware of the traffic turning onto the base leg in front of the jet.

Despite the controller’s again instructing – in a “much more forceful tone” – the PA-28 to turn right, the pilot continued with the left turn. The 737 crew was advised to continue the approach, as the PA-28 was higher,

While the weather conditions were fine, and the student managed to maintain visual contact with the jet, the two aircraft converged to a point where they were not separated horizontally and were only separated by 100ft vertically.

The PA-28 pilot was instructed to orbit and then establish on the approach to runway 11, by which point the 737 – with 164 passengers and crew – had landed.

Investigators state that the collision-avoidance system on the 737 sounded a ‘traffic’ alert during the loss of separation and its pilots could see the PA-28. The inquiry is continuing and will examine other aspects of the event before reaching final conclusions.