UK investigators have determined that the windmilling propeller on an experimental Piper M350 – which had been modified with a hydrogen fuel-cell engine – locked out power to the electric motors, leading to a forced landing which badly damaged the aircraft.

The ZeroAvia aircraft (G-HYZA) had been undergoing a flight test during which the crew switched off a high-voltage battery to enable the motors to be supplied solely by power from the hydrogen fuel cell.

But when the battery was switched off, the momentary interruption of power to the motors allowed the propeller to windmill in the airflow, generating a back-voltage which was sufficient to activate an over-voltage protection system.

The aircraft’s experimental powerplant used inverters to convert a 300-400V DC output, from the battery and fuel cell, to an AC input for two electric motors. Each motor had its own inverter and these contained software to provide fault protection – including out-of-tolerance voltage.

For some faults, including over-voltage above a threshold of 820V, the affected inverter would cut power to the motor. 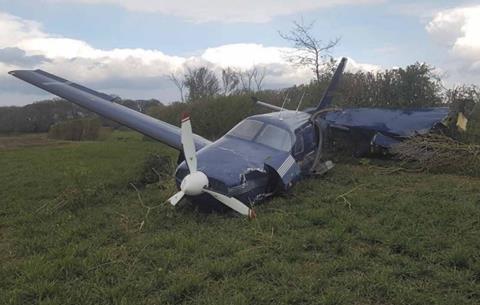 Too low to turn back to the airport, the Piper was wrecked as it landed in a field

The aircraft had been conducting a test flight circuit from Cranfield airport, with a pilot and observer, on 29 April last year.

During the downwind leg at 100kt the pilot reduced electrical power, from 95kW to 90kW, to check the effect on airspeed.

The aircraft slowed to 95kt and, as it turned onto the base leg, the observer suggested briefly increasing power to 120kW to regain the lost airspeed, and reducing propeller speed, ahead of a planned battery switch-off which would allow the aircraft to continue only under fuel-cell power.

According to the Air Accidents Investigation Branch, the pilot increased power to 120kW but did not reduce the propeller speed.

As the aircraft approached the runway at about 940ft height, the pilot reduced power to 90kW, set the airspeed to 90kt, then switched off the battery.

“Immediately, all electrical drive to the propeller was lost,” says the inquiry.

It says the momentary interruption of power at battery switch-off allowed the windmilling propeller to turn the motors, effectively causing them to act as generators and creating electrical energy that was fed back to the inverters – sufficient to trigger the over-voltage protection and cause the inverters to lock out the motors.

The inquiry says the loss of power occurred at a point where the aircraft was “not in a position where it could safely glide to the runway”.

As the aircraft started to lose height, the crew made several unsuccessful attempts to reset the system and restore power from the fuel cell and the battery. The aircraft, having travelled the length of Cranfield’s runway 03, was about 320ft above ground when the observer remarked that power could not be regained. After declaring an emergency, the pilot attempted to turn left and position for a landing on runway 21.

“Almost immediately he recognised that he did not have sufficient height to complete the manoeuvre so lowered the landing gear and selected full flap for a forced landing in a field,” says the inquiry.

Investigators state that the aircraft touched down at 87 on level grass but passed through a hedge, breaking off the left wing and coming to a halt with its nose-gear and left-hand main wheel in a ditch.

Neither crew member was injured and the airport fire service arrived quickly. The observer returned to the aircraft, venting the hydrogen tank to the atmosphere and disconnecting the battery to make the aircraft safe.