A Saudi-led coalition has begun a campaign of air strikes against the Houthi militant group that is maintaining a stronghold within Yemen and is trying to overpower the Yemeni government after forcing president Abd Rabbuh Mansur Hadi into exile.

Under Operation “Decisive Storm”, Saudi Arabia led the 10-strong coalition into neighbouring Yemen – the air space of which is currently controlled by Riyadh – on the morning of 26 March.

The coalition includes all the members of the Gulf Cooperation Council bar Oman, while Egypt, Jordan, Morocco, Pakistan and Sudan are also believed to be among the nations supporting the effort.

“The Kingdom of Saudi Arabia launched military operations in Yemen,” Adel bin Ahmed Al Jubeir, Saudi’s ambassador to the US, told a press conference on 26 March. “The operations launched were air strikes… The objective is to defend the legitimate government of President Hadi from the takeover attempts by the Houthi militants in Yemen.”

Al Jubeir says President Hadi utilised Article 51 of the UN charter on 24 March to request assistance and support from neighbouring nations to protect the government and help defeat the Houthis.

“The use of force is always the last resort, and it is with great reluctance that we took this step along with our partners in the GCC countries, as well as outside the GCC,” Al Jubeir says.

He adds that the “radical militant group” has managed to take over the Yemeni armed forces, so it has access to missiles, heavy weapons, military bases, ports and the air force.

“You have a militia group that is now in control of, or can be in control of, ballistic missiles, heavy weapons, and an air force,” Al Jubeir says. “I do not recall in my reading of history of any militia that had an air force or control of an air force. It is a very dangerous situation and we must do all we can to protect the people of Yemen.” 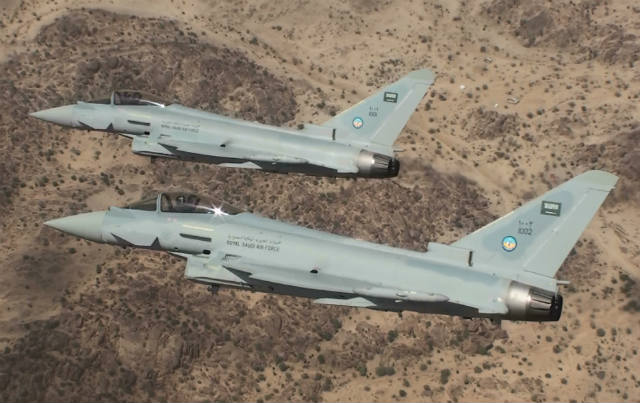 Partner nations’ air assets have already been moved to Saudi Arabia and a number of other assets are on their way, Al Jubeir says. Operations are not limited to a particular city or region, but it is reported that operations began in capital city Sana’a.

It is believed that Saudi Arabia has contributed some 100 aircraft to the effort. The Royal Saudi Air Force operates 26 Eurofighter Typhoons, 129 Boeing F-15s and 81 Panavia Tornado GR4s, according to Flightglobal’s MiliCAS Fleets database.

The USA is supporting the effort but is not contributing any military assets or personnel, Al Jubeir says. Washington is currently co-ordinating a coalition that is carrying out air strikes against Islamic State militants in Iraq and Syria – a campaign that Saudi Arabia and other GCC nations have so far supported.