Scorpion readied for another starring role at Farnborough

A production version of the Textron AirLand Scorpion jet with a modified wing and landing gear is coming together in the same Wichita facility where the demonstrator was secretly constructed over an 18-month period three years ago.

Within Cessna, the Textron subsidiary that designed and built the surveillance and light attack fighter, the Scorpion’s home on the east side of town is known as the “Glass House”, but few are allowed to see inside. It is here where Cessna developed its most advanced designs, including most recently the CJ4 business jet. The composite-skinned Scorpion twin-jet represents a more ambitious gamble, offering a military fighter on the export market despite little prospect of a near-term order from Cessna’s host government in the USA.

As the project enters its fifth year, Textron AirLand is making preparations for a lengthy production run of the Scorpion, assembling a supply chain and working to unveil a surprise at the Farnborough air show.

During a 25 April tour, signs posted around the engineering offices touted a 30 June first flight date for the production configuration of the Scorpion, leaving two months to complete assembly and safety of flight testing on software and systems. But that schedule grants perhaps just enough time for the production-conforming aircraft to make a debut appearance at Farnborough, which begins 10 days later.

For Textron’s self-funded gamble to pay off, this production version may play the deciding factor. The Scorpion demonstrator has flown displays at air shows, participated in military exercises and offered back-seat rides to potential customers from Asia to Latin America. So far, however, the demonstrator has not attracted a launch order. 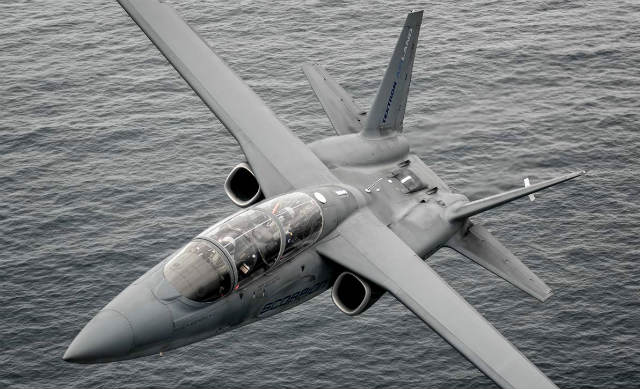 For several months, Textron AirLand has preached patience. With the production-conforming version on its way, orders could soon follow, as a host of potential customers get to see and feel the final configuration. Moreover, the production version could also be entered into a newly-formed airworthiness “accreditation” programme for the US Air Force.

The USAF’s accreditation office, offering the service’s airworthiness stamp of approval to aircraft not in the military’s inventory, opened its doors on 4 April and early discussions with Textron AirLand are under way, says Dale Tutt, lead engineer for the Scorpion.

Several questions about the accreditation process remain, such as whether the USAF’s certification authority itself would accept an “accreditation” certificate or require further testing. But the Textron AirLand hopes to be ready to move beyond those questions by mid-June, allowing detailed planning to begin for the Scorpion’s accreditation testing, Tutt says.

Meanwhile, workers are making adjustments to the original Scorpion design. Textron AirLand rushed the Scorpion from design concept to first flight in less than 20 months. The production version allows them to refine the design of certain components. The main landing gear, for example, of the Scorpion demonstrator is an elaborate oleo strut design. It is being replaced with a simplified trailing link gear, removing 90kg (200lb) in the process, Tutt says.

Another change adds 4˚ of sweep to the outboard span of the wing leading-edge. The demonstrator revealed a centre of gravity slightly aft of the design intent, Tutt says. Increasing the sweep angle should correct the centre of gravity position while not affecting speed or manoeuvrability performance, he adds.

Other changes from the demonstrator design include the speed brake, which was bolted on to the top of the aft fuselage as an afterthought. The speed brake on the production version is designed to be flush with the fuselage skin, Tutt says.

More tweaks are being made beneath the skin. Cessna designed the Scorpion with a unique twin-keel hull, allowing the fuselage to accommodate a centerline payload bay. The original design allowed the Scorpion to fully retract a 15in-wide sensor turret assembly. Cessna changed the production design to store a 25in-wide sensor, such as the Sierra Nevada Gorgon Stare wide area surveillance system.

In the nose Textron AirLand is expanding optional payloads beyond the standard weather radar. The production Scorpion will have space reserved to instead house a multimode fighter radar, such as Northrop Grumman’s APG-68 fire control and synthetic aperture system. 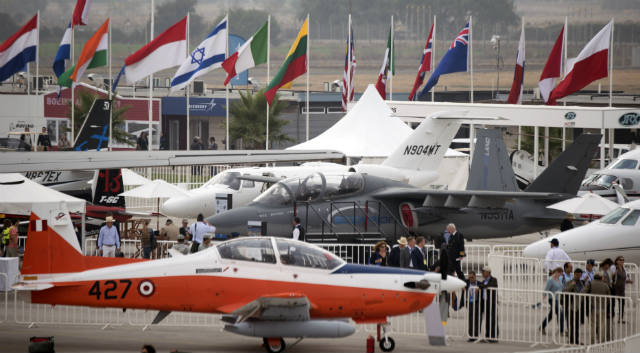 The list of potential Scorpion customers is long, but their commitment level remains murky. Textron AirLand has publicly displayed the aircraft all over the world, including in Bulgaria, Chile (above, during the FIDAE air show), Colombia, France, Romania, the United Arab Emirates and the UK. The demonstrator aircraft offered a glimpse of the Scorpion’s capabilities but by itself was not fully convincing.

It is a familiar story in aviation. In the early 1980s, Northrop displayed the F-20 fighter demonstrator to foreign militaries but a lack of interest from the USAF spooked other customers and the programme was cancelled.

Textron AirLand president Bill Anderson insists the same lack of US sales for the Scorpion is not a factor in discussions with foreign governments.

“They want to fly the production-conforming airplane,” Anderson says.

The Scorpion’s connection with Textron Aviation means that, unlike the F-20, foreign buyers will have access to global support infrastructure set up for the 17,000 aircraft in service with Cessna and Beechcraft customers, he says. 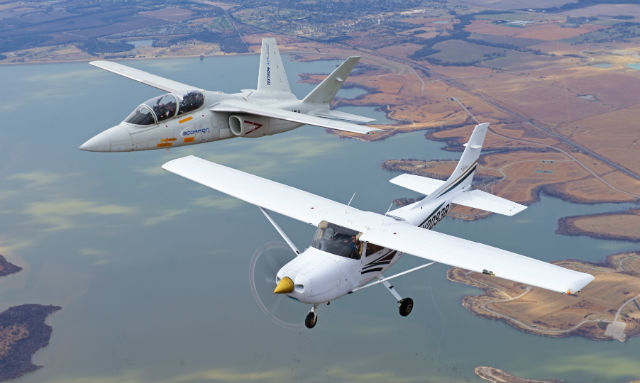 But Textron Aviation’s design team is not yet giving up on a run for the T-X contract. For more than 60 years, Cessna and Hawker jet trainers have supported US forces, ranging from the retired, tandem-seat Cessna T-37 Tweet to the T-1A Jayhawk, a training version of the Hawker 400 twinjet. Textron AirLand is not ruling out a bid for the T-X contract with a clean-sheet aircraft design, Anderson says.

Textron AirLand’s independent bid depends on the next moves by the USAF. Along with four other competing teams, Textron AirLand is waiting for the USAF to release the first draft of the solicitation document, which should reveal details of the programme’s requirements, funding and schedule.

USAF officials have also talked about launching an OA-X programme to replace the Fairchild Republic A-10, a fleet now scheduled for a controversial retirement in fiscal year 2021. But the force's plans for OA-X remain too “vague” and imprecise for Textron AirLand to comment on the Scorpion’s suitability, Anderson says.

Likewise, Textron AirLand received positive signals from US Naval Air Systems Command last year, following a sales pitch based on using the Scorpion to offload land-based training from the Boeing F/A-18 Hornet fleet. Textron AirLand promises the Scorpion can operate for less than $3,000 per hour with a 98% mission reliability rate. So far, the navy has revealed no path to acquiring the Scorpion over the next six-year budget plan, Anderson says.

In the near term, the best opportunity for sales is likely to come from the international market. Textron AirLand designed the Scorpion primarily as an intelligence, surveillance and reconnaissance platform, with the light attack mission a secondary capability.

As the company assembled a business case to launch the Scorpion demonstrator programme, a Textron AirLand market survey counted a potential market for 2,000 aircraft, counting replacements for a global fleet of jet-powered Aero Vodochody L-39s, Cessna AT-37s, Douglas A-4 Skyhawks and Sukhoi Su-25s. As suppliers for the production Scorpion have come on board, they have performed more recent surveys that validate the original figure, Anderson says.