The US Air Force and Raytheon have conducted live fire flight tests of the Small Diameter Bomb II precision-guided weapon onboard the Boeing F-15E Strike Eagle.

Two successful tests firing against moving targets took place – one in September 2014 and one in early February – at White Sands Missile Test Range in New Mexico, which qualifies the weapon for USAF to make a “milestone C” decision on production. This would then ultimately lead onto it entering low-rate initial production (LRIP).

The weapon is expected to continue undergoing guided vehicle and live fire testing in coming months as a decision is made on whether SDB II will enter LRIP.

John O'Brien, SDB II programme director at Raytheon, believes that LRIP is likely to start “this summer”, while in FY2015 the company will complete system-level qualification for the engineering and manufacturing development phase. The weapon is expected to be fielded on the F-15E in January 2017, while the Department of Defense and Raytheon are also exploring its integration on the Lockheed MartinF-35 and F-16, as well as the Boeing F/A-18E/F. 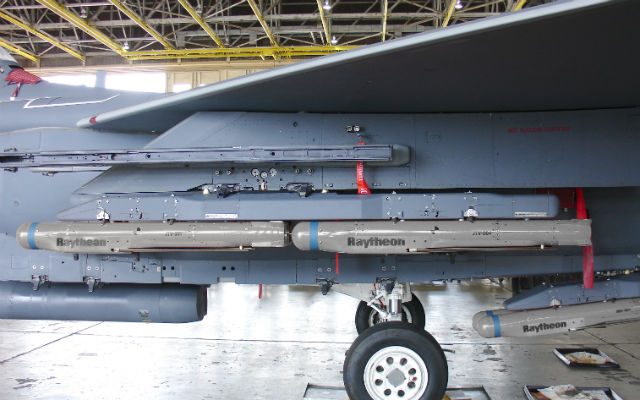 One live flight attempt in October resulted in a negative result as the weapon became unstable mid-flight and hit the ground. Raytheon claims that although the result was not as expected, testing continued in order to move the weapon towards LRIP.

“This single flight test does not minimise the very positive test results SDB II has achieved; nor does it detract us from ensuring we have a robust design solution that reliably meets the warfighter's needs,” O'Brien says.

The F-15E deploys SDB II from its BRU-61/A four-weapon carriage system, which allows the aircraft to carry seven lots of four of the weapon at one time.

SDB II incorporates a tri-mode seeker, comprising millimetre-wave radar and infrared and laser-guidance sensors. This, in addition to the GPS and inertial navigation elements, achieves the precision guidance. It includes a multifunction warhead that is designed to counter hard and soft targets.