Rescue authorities are preparing to expand the search area for the missing Malaysia Airlines Boeing 777-200 on both sides of the Malay peninsula.

The eastern search area will be increased to a 100nm from the IGARI waypoint, which lies in Singaporean airspace some 250nm north-east of Kuala Lumpur.

But a second region, similar in scale, will also be searched to the north of Sumatra west of the peninsula, to account for the possibility of a course change by the Beijing-bound flight MH370.

The combined search area indicated by Malaysian Department of Civil Aviation chief Azharuddin Abdul Rahman is vast – some 15-20 times the primary search area for Air France flight 447, which crashed in the South Atlantic in 2009.

Azharuddin says the effort to find the 777 will be “intensified”. The aircraft is still officially considered “missing”, he says, and the operation is “still search and rescue”. 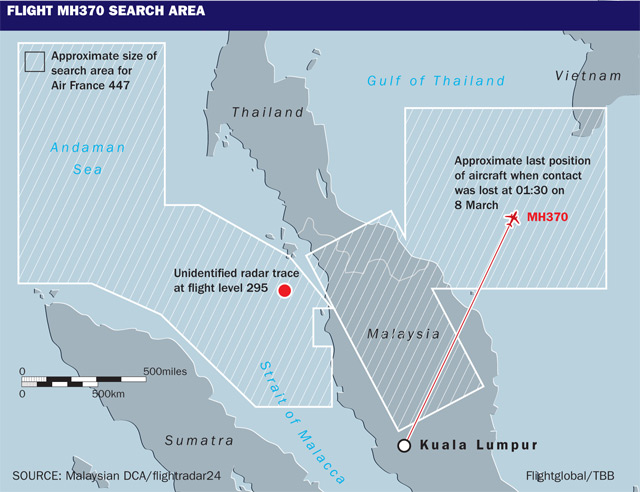 “We don’t know exactly what’s happened to the aircraft,” he adds. “We cannot do guesswork.”

The search effort is reminiscent of that to find the Air France Airbus A330 which had been operating flight AF447 when it disappeared on 1 June 2009.

But within the first few days of the AF447 loss the search teams had used transmitted ACARS data and analysis of aircraft dynamics to narrow the probable crash site to a circle of radius 40nm centred on the last known position.

While the Malaysian authorities, however, have not indicated the extent of any similar data transmissions from MH370.

Azharuddin says the search is being conducted initially by air, with surface vessels then combing designated regions to “make sure every inch of ground is covered”.

Malaysia Airlines’ last positive location for MH370 puts the aircraft close to the boundary between four flight information regions – Kuala Lumpur, Singapore, Bangkok and Ho Chi Minh – according to ICAO data. The aircraft’s location would have placed it just outside of Vietnamese airspace, but the status of any handover is unclear.