More than 60 hours after the Malaysia Airlines (MAS) Boeing 777-200 lost contact with air traffic control, Malaysia says it has yet to locate the aircraft, or recover any possible debris from the jet.

Speaking at a press conference, the director general of its Department of Civil Aviation Azharuddin Abdul Rahman denied reports that Vietnamese searchers have found debris resembling an aircraft door off their coast.

“We’ve called them (Vietnamese authorities) and confirmed that they have not spotted any such objects,” says Azharuddin.

He adds that a number of search aircraft also reported sightings of what they thought was an aircraft tail belonging to the "ill-fated" MAS jet. This however turned out to be logs tied together. Malaysia's maritime enforcement meanwhile reported oil slicks in the South China Sea and samples have since been sent for tests.

“Hopefully when we receive the report from the lab, we will be able to inform you that the particular oil slick or fuel came from the missing aircraft,” says Azharuddin. 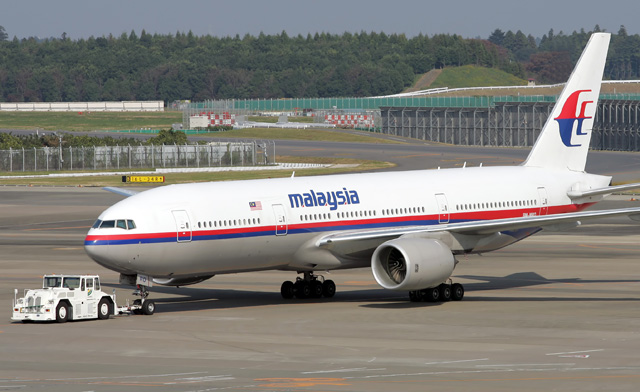 “Unfortunately we have not found anything that appears to be objects from the aircraft, let alone the aircraft. We will be intensifying our efforts to locate the missing aircraft.”

He adds that since 8 March, no signals from the aircraft have been detected by any of the vessels deployed. The aircraft’s flight data recorders are designed to send off a signal upon impact.

“For an aircraft to go missing just like that from the radar… we are equally puzzled,” says Azharuddin, who also urged patience and stressed that search teams are "doing their best".

He adds that the authorities are also reviewing records and video footage of the two passengers who flew on MH370 with fake passports, and that all possibilities are being looked at.

Azharuddin also disclosed that there were five people who checked-in for the flight but did not board the aircraft. Their luggage were removed accordingly and MAS is confident that there were no "unaccompanied baggage" on the flight.

Asked whether there were any lapses in security at the Kuala Lumpur International Airport, he would only say that the airport complies with international standards.

Investigators from the US Federal Aviation Administration and the National Transportation Safety Board have also arrived in Malaysia, he adds.

The search for MH370 has entered its third day and involves 34 aircraft and 40 ships.

Th aircraft, registered 9M-MRO, was on the Kuala Lumpur-Beijing route, when it lost contact with the Subang Air Traffic Control at around 01:30 local time on 8 March. Its last reported position was over an area between Malaysia and Vietnam.