The A350 will arrive on the market two years after Boeing's 787. Can Airbus use that time to hone the new twinjet to outperform its rival?

It is more than a year since Airbus showed its hand in the battle for the mid-size widebody market, unveiling the A350 as a major derivative of the A330 – then powered solely by General Electric GEnx engines – to compete against the all-new Boeing 787. Over the past 12 months, the new Airbus has undergone several significant design refinements. In its latest guise – shown to customers in November – the twinjet shares little more than 5% commonality with its predecessor. 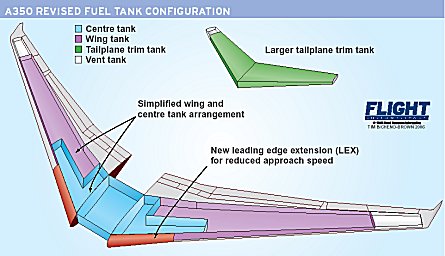 Dougie Hunter, A350 chief engineer, says the design process has been evolutionary. Between December 2004 – when the aircraft was unveiled – and April last year, the A350 programme saw weight and range increases, structural material selections, aerodynamic improvements, a slight stretch (for the larger -900 model) and cabin revisions.

Since then improvements have resulted in a “November 2005” specification. The improvements include aerodynamic changes, enabling cruise speed to increase slightly; cabin enhancements; simplification of the structure and fuel system; and an all-new, deeper nose design to accommodate the new underfloor flightcrew rest compartment (FCRC). The A350 has also gained a second engine option – the Rolls-Royce Trent 1700 – and a new “face”, through the revision of the cockpit window layout. The latter, although ostensibly performed to improve aerodynamics, will set the new aircraft apart visually from all the previous Airbus widebody models.

Definition freeze
“The next major step will be ‘Milestone 5’ – the definition freeze – due at the end of the first quarter of 2006,” says Hunter.
While Airbus has adopted the so-called “787 technology” engines for the A350, it has baulked at following Boeing all the way down the composites route,  the material accounting for around 60% of the 787’s structure. However, Airbus boasts that “60% of the A350’s structure is made of advanced materials, enabling us to achieve the equivalent of an 8t weight reduction,” says Hunter (see graphic). 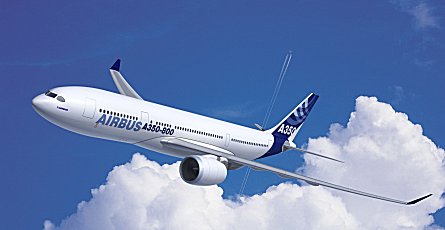 Despite Airbus’s more conservative approach to the use of composites, the material accounts for two-thirds of these “advanced materials”, with carbonfibre reinforced plastic (CFRP) being employed in the wing and empennage, where Airbus says that high fatigue resistance was the selection driver. However, aluminium lithium – rather than composites on the 787 – has been adopted for the fuselage skin. The driver for this was the need to cope with accidental damage, and the alloy represents around a fifth of the A350’s advanced materials, says Hunter. “Aluminium lithium allows for easy damage assessment and standard procedures for repair,” he adds.

One key change in the latest design iteration is the increased cruise speed, which closes the gap to the Mach 0.85-capable 787 family. The A350 is now capable of M0.83-0.84 – to the approval of International Lease Finance, which had been unhappy with the A350’s lack of speed.

Although superficially based on the A330, the A350’s wing is of largely composite construction and has undergone revisions over the past 12 months to net further performance improvements. “Using the latest computational fluid dynamics [CFD] technology, which we’ve verified in the windtunnel, we’ve reprofiled the mid-section of the upper surface of the wing,” says Hunter. “We’ve also reshaped the flap-track fairings and reduced their length using CFD analysis,” he adds.

Hunter says these changes “delay the onset of drag rise and push long-range cruise speed up from Mach 0.82 to 0.83, and economic cruise speed to Mach 0.84”. 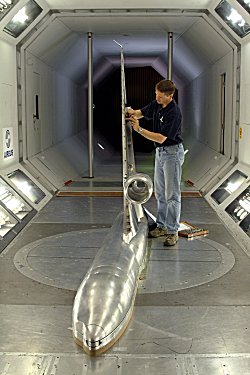 The A350 wing has borrowed the A380’s “droop nose” inboard leading-edge device (essentially a sealed number one slat) since early in its conception, which gives improved low-speed efficiency. Airbus has now incorporated a leading-edge extension to reduce approach speeds.

Ongoing CFD and windtunnel analysis has allowed Airbus to optimise the wing/engine interface for the GEnx-powered version, and a similar effort with the belly fairing shape has reduced drag and helped to improve the cruise-speed performance after it was discovered that the original design caused airflow to interact with the A350’s larger-diameter engines. The wing also features larger winglets, which are 50% taller and 33% larger in area than the existing design.

The adoption of CFRP fore and aft spars for the outer wing (outboard of the composite centre wingbox) has enabled Airbus to delete the centre spar and revise the design of the metallic ribs, providing further weight reductions. The revamped wing also incorporates a simplified fuel system, with one large centre fuel tank extending into the outer wing flanked by a main wing tank each side, further reducing weight and improving operating efficiency. The tailplane trim tank has also been expanded, which improves centre-of-gravity management during flight.

Smaller fin
Another weight and drag saving comes from adopting a smaller fin for the stretched A350-900 variant, as it benefits from a longer moment arm. The existing A330-200 (on which the A350-800 is based) has a larger fin than the A330-300 due to its shorter moment arm.

The most significant visual change in the latest specification is the revamped nose section, driven by the need to increase the size of the planned lower-deck crew rest area. Airbus decided last year to relocate the FCRC from behind the cockpit to what was the avionics bay under the cockpit to free more space in the passenger cabin. After tests with a mock-up, the manufacturer realised it needed more height, so the A350 now sports a deeper nose section providing 1.75m (5.7ft) of stand-up height in the compartment – around 150mm more than the configuration with the existing fuselage shape.

As part of the changes Airbus has simplified the flightdeck window arrangement, says Hunter. “We’ve gone from four lateral windows to two – aerodynamics were the driver as it nets a 0.25% drag reduction.”

The reprofiling has enabled Airbus to simplify the nose section’s structure, and to drop earlier plans to fit a longer nose-gear leg. “We had adopted the longer leg to give the A350 a level standing position on the ground, but the reprofiling enables us to have a lower attachment point to achieve the level attitude with existing leg length, although the gear will be new,” says Hunter.

Incumbent supplier Messier-Dowty has been selected to build the A350’s all-new main landing gear (MLG), while the supplier of the new nose gear is yet to be finalised. Choice of supplier for the auxiliary power unit, the remaining major system selection, is expected to be made by February.

As well as being strengthened for the A350’s higher design weights compared with the A330, the new main gear is simplified as it finally breaks away from the A330/A340 design, which was conceived to rely upon an additional central landing gear unit for the heavier A340-200/300 variants. “By eliminating the A330/A340 centre landing-gear bay, we have more room to stow the MLG, which allows us to delete the mechanism that shortens the gear on retraction, which reduces maintenance and improves reliability,” explains Hunter. “We can also accommodate larger wheels and tyres should we need to in the future for higher weights,” he adds.

Nacelle work
Goodrich is to build the engine nacelle for the A350’s GEnx engine, with Airbus supplying the composite inlet, which incorporates a “zero splice” acoustic inner barrel to provide a new level of fan-noise reduction. Arrangements for the Trent 1700 nacelle have not been finalised. 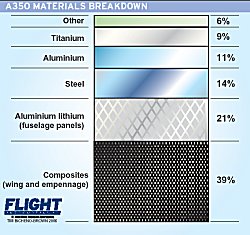 Unlike the 787 and 747-8 nacelles, the A350 unit does not incorporate noise-reducing chevrons. “We didn’t get a noise advantage from chevrons, and there is a specific fuel consumption penalty, so we’ve not adopted them,” says Hunter.

Airbus is working with designers on an all-new cabin for the A350, with a mock-up expected to be unveiled in Toulouse later this year. The manufacturer is looking at incorporating innovations from the A380, as well as new ideas.

It is a little over four years until the A350 is due to enter service – in mid-2010 –  around 24 months after its US rival. Airbus engineers know they must keep pushing to ensure that they can turn its later arrival into an advantage and wring the maximum out of the A350’s specification.