Sikorsky’s CH-53K King Stallion has finally reached “day one” of its 2,000h flight test programme after a maiden 30min flight this morning at the company’s development flight centre in West Palm Beach, Florida.

The flight comes about one year late, and nine years after Sikorsky received the system design and development contract from the Marine Corps to produce a replacement for the Sikorsky CH-53E Super Stallion.

The H-53K looks similar to its predecessor, but is actually a brand new fly-by-wire, glass cockpit aircraft that can lift 12.2t (27,000lbs), or triple the weight of the E-model.

Once deployed with the US Marine Corps, officials say it will revolutionise the way the service fights wars and will be the largest helicopter in the US military’s toolbox. The first flight at 8:02am local time on 27 October marks the start of a three-year flight test programme, with the first four engineering and manufacturing development (EMD) assigned to that mission.

The programme has been plagued by delays – some programmatic and budgetary and others technical. Sikorsky had hoped to fly EMD-1 last December, but several issues including problems will main rotor gear box pushed the event back. 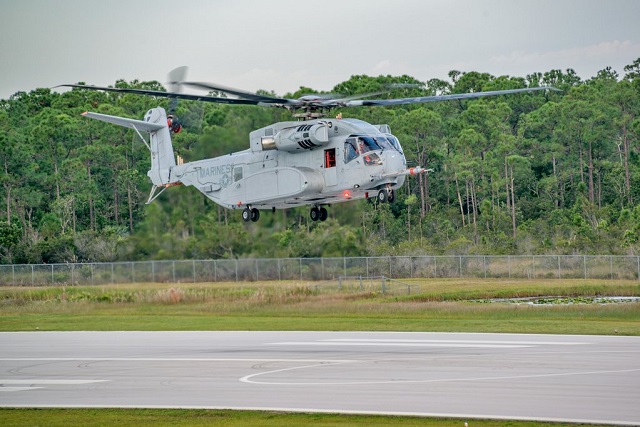 USMC program manager for heavy-lift helicopters Col Hank Vanderborght says the initial operational capability milestone planned for 2019 is still achievable with four aircraft despite the delay. However, he expects a three-month delay to being ready for a Milestone C review by the Pentagon – a decision point that approves the entry into low-rate initial production. The current estimate places that decision in January 2017.

Vanderborght and Michael Torok, vice-president of Sikorsky’s Ch-53K programme, says the potential production gap caused by the development delay has been bridged with additional orders for four “SDTA” aircraft to support operational test and evaluation.

Another two are being purchased for US Naval Air Systems Command’s VMX-22 test and evaluation squadron. The contract for long-lead parts for that fifth and sixth helicopter was recently awarded to Sikorsky and the full procurement contract is expected in 2016, officials say.

“We’re being mindful of the costs associated with shutting down a production line, and we’re basically following the programme plan we’ve had all along,” says Vanderborght.

To achieve Milestone C, Sikorsky must demonstrate the aircraft’s full performance against the requirements set at the start of the programme, such as lifting 12.2t and carrying a 5.4t (12,000lbs) payload 110nm.

In terms of the next flight of EMD-1, Torok expects flights to occur “every couple of weeks” as data from each flight is processes and compared against engineering predictions and computer models. The company has already clocked 230 flight test hours on its H-53K ground test vehicle.

“The pacing won’t be set by the aircraft; it will actually be the data itself,” he says. “There is a significant amount of instrumentation on this aircraft, in fact far more than we’ve had on any of our other Sikorsky programmes.”

Despite the slow start, USMC still intends to procure 200 King Stallions with full-rate production expected in 2020.