The long-awaited milestone for the compound helicopter comes almost two years late, but well ahead of the company’s previous forecast that first flight may be delayed until 2009.

The X2, which is designed to cruise at 250kts, now enters a four-phase series of flight tests. Phase 1 will demonstrate the hover performance of the coaxial main rotors. 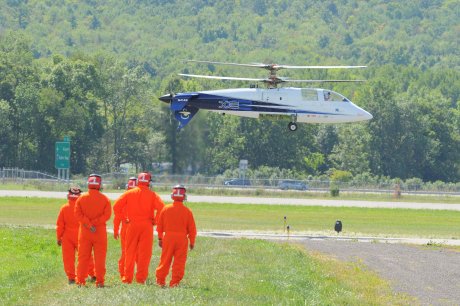 Sikorsky will gradually increase forward velocity airspeed until reaching the 250kt goal at the end of phase 4. The flight tests will support a decision expected in 2010 on whether to launch the X2 as a new civil aircraft.

The X2 demonstrator is powered by the Light Helicopter Turbine Engine Co. (LHTEC) T800 engine, which was developed to support the cancelled Sikorsky/Boeing RAH-66 Comanche.

Sikorsky launched the X2 as a modern reprisal of the 1970s-era XH-59A advancing blade concept. The X2, however, features fly-by-wire controls and avionics that are hoped to counter the high vibration levels that doomed the XH-59.

If the X2 flight test phase proves successful, Sikorsky plans to launch a family of new civil and military helicopters based on the coaxial, compound design.