After the 2020 Nagorno-Karabakh conflict between Armenia and Azerbaijan, in which loitering munitions were seen as playing a decisive role, interest in the new weapon type among Asian militaries is growing.

The vast Pacific Ocean, as well as the many smaller seas and thousands of islands that dot the region, are driving interest in maritime uses of loitering munitions, says Assaf Schechter, director of loitering munition systems with Israel Aerospace Industries (IAI), at the Singapore air show. 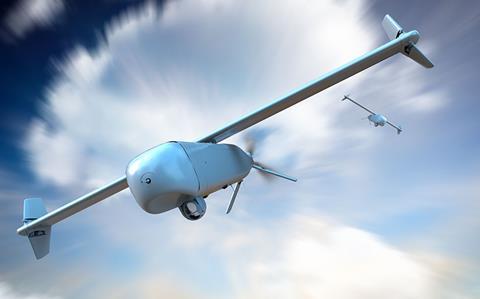 Militaries are interested in anti-shipping applications for the weapon type, as well as uses against tanks and radars. Schechter declines to name specific potential customers. IAI makes a variety of loitering munitions – essentially explosive-laden drones – including the Harpy, Harop, Green Dragon and Rotem.

Loitering munitions will complement conventional anti-ship missiles, but not replace them, Schechter says. The type gives commanders a way to disable an enemy ship, without sinking it.

“If you cripple the bridge or the rudder or the missile base, you succeed and you don’t need to sink a ship,” Schechter says.

Militaries are interested in giving commanders options to sideline an adversary while limiting potential for a situation to escalate, he says.

“When you’re going against a superpower on the first shot you do not want to sink a ship,” says Schechter.

Loitering munitions fly much slower than rocket-powered anti-ship missiles, making the type vulnerable to being shot down by ship-borne close-in weapon systems, such as automated Gatling guns. Still, there are ways for loitering munitions to get through, especially if multiples of the type converge on the target, says Schechter.

“Coming from different directions and different angles, more than one kill vehicle will penetrate,” he says.