The Pentagon is bullish about resolving issues with the F-35 Lightning II’s escape system that has restricted lightweight pilots of from flying the fifth-generation combat jet, with the joint programme office (JPO) now expecting delivery of a slimmed-down “Gen 3” helmet from Rockwell Collins by November for rollout in 2017.

One US Air Force pilot was transferred to the F-22 Raptor last year after sled tests of the Lockheed Martin F-35's emergency escape system revealed “unacceptable” loads and stresses on mannequin weighing 47kg (103lb) and 62kg (136lb) when ejecting with the newly delivered third-generation helmet. Those loads might break a human pilot's neck or cause serious injury.

Fixes include a switch on the Martin Baker US16E (MK16) ejection seat that delays the parachute's opening “by milliseconds” when occupied by a lightweight pilot, plus a head support panel sewn between the parachute risers. However, a weight reduction for the third-generation helmet from 2.3kg (5.1lb) to 2.1kg (4.6lb) has also been required.

Estimates in February predicted that a helmet solution, which uses lighter-weight materials and has detachable day and night visors, would have lagged ejection seat modifications by “eight to nine months”. Lockheed, Rockwell and other suppliers have since promised to deliver it sooner, officials say.

“We’ll have our first Gen 3 light helmets now aligned with the seat in November of 2016, so we can remove the restriction for the lightweight pilots weighing under 136lb,” Bogdan said at a forum in Washington DC earlier this month. “We’ve tested helmets with similar mass properties, and we think it’s going to work.” 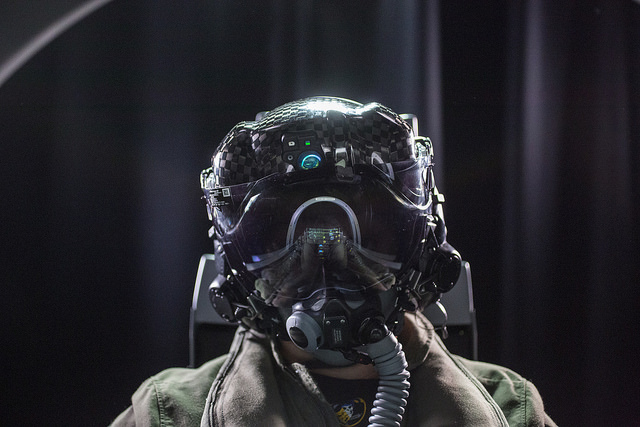 On 29 March, the programme office confirmed that November delivery date, and said one test asset is already on hand to validate that a reduced weight helmet will indeed reduce the likelihood of a serious neck injury during ejection, in combination with Martin-Baker’s seat modifications.

“Those three fixes will be in place this year,” a spokesman says. Those changes will be gradually rolled out across the fleet and cut into aircraft production beginning in 2017.