The Solar Impulse round-the-world flight on solar power only has been grounded in Hawaii – because its five-day/five-night flight from Japan overcooked its batteries.

Repairing “irreversible” damage will take at least two to three weeks, according to the mission team. Repairs and replacements “will take several weeks to work through”; meanwhile, engineers are “looking at various options for better management of the cooling and heating process for very long flights”.

The problem started when the aircraft took off from Nagoya on 29 June: the batteries got too hot as the aircraft ascended, owing to “over insulation”. According to Solar Impulse, the ground team watched the situation, but had no way to decrease the temperature later in the flight – each 24h cycle requires that the aircraft ascend to 28,000ft during daylight hours, when sunlight charges the batteries, so it can gradually descend during the night as battery power runs down.

The flight to Kalaeloa airport in Hawaii was the project’s second attempt to make its planned half-Pacific leg. After departing Nanjing on 30 May, looming bad weather over the ocean forced a diversion to Japan, where the aircraft waited a month for a clear forecast.

In the event, the trip to Hawaii broke all records for manned solar-powered flight, at 117hr 52min and 7,212km. Pilot André Borschberg, working alone in the single-seat cockpit, could rest for no more than 20min at a stretch – and then only at lower altitudes, when an oxygen mask is not needed in the unpressurised cockpit.

Bertrand Piccard, Borschberg’s partner in the project, will take the controls for the next leg, to Phoenix, Arizona. From there the plan is to reach New York in two legs, then cross the Atlantic to either North Africa or southern Europe before returning to Abu Dhabi, where the flight began in early March. 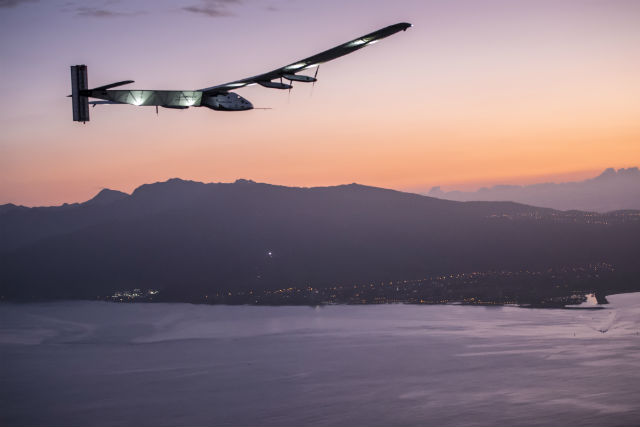 Solar Impulse on approach to Hawaii