Philae, the washing-machine-sized lander that the European Space Agency has successfully delivered to the surface of a comet, looks destined to complete just a fraction of its scientific agenda as it counts down the final hours before its batteries run out after a landing system malfunction left its solar panels in the shadow of one of 67P/Churyumov–Gerasimenko’s many irregular surface features.

Although visibly disappointed, scientists, engineers and mission controllers at ESA’s ground stations in Germany remain optimistic for realisation of the bulk of the mission’s scientific objectives, which are rooted in the so-far hugely successful comet orbiter, Rosetta. The plan for Philae had been to maximise its activity under battery power during about 2.5 days after touchdown and then possibly enjoy an extended scientific mission on solar power.

In a post-landing briefing, Andrea Accomazzo, mission director at the European Space Operations Centre in the German city of Darmstadt, said he remained hopeful that Philae would have enough power left to make one more contact with Rosetta during the European evening on 14 November. And, added Stephan Ulamec, lander manager at Germany’s DLR aerospace agency, there remains some chance that Philae’s batteries may be topped up enough in spring 2015 to bring it back to life. During that time, the comet’s orientation will change as it approaches the Sun.

But that prospect is considered a distant hope, with much depending on how much dust from the comet ends up contaminating the lander’s solar panels.

Accomazzo and his colleagues are in any case still hoping to figure out exactly where on the comet Philae has come to rest. Though it initially touched down very near the centre of its assigned landing spot – after a seven-hour ballistic descent, unaided by any propulsion or guidance system – Philae’s harpoon-style anchoring system failed to fire and it bounced twice, apparently coming to rest on a slope, with one of its three legs up in space. 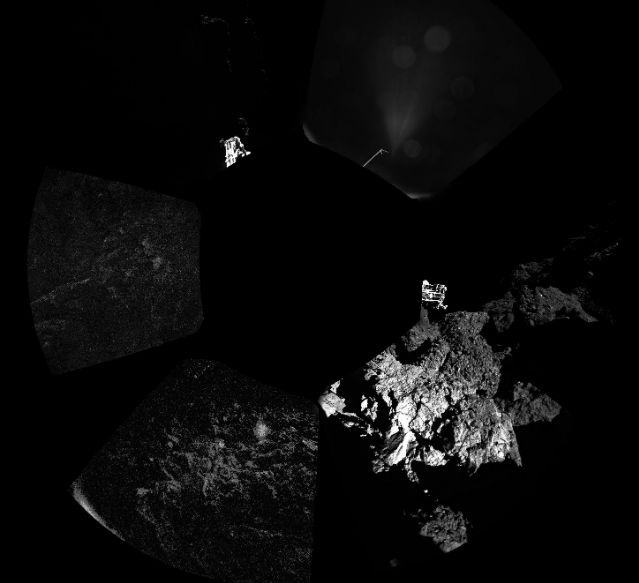 Because Philae was not anchored to the surface of this very-low-gravity body and its position was not known, the lander’s operators feared activating any mechanical systems, including attempting to fire the anchor mechanism,for fear of upsetting the lander. They did, however, decide to attempt to drill into the surface of the comet in hope of bringing some material into Philae's onboard laboratory with its last scraps of power.

Ulamec expects the lander to remain where it is as the comet gets closer to the Sun, as the increasingly powerful dust stream which will be kicked off the comet’s surface by the solar wind as it becomes active in the spring of 2015 should not be strong enough to dislodge it.

For now, Rosetta is flying around 67P – this is controlled flight, not orbiting, as gravity is so low – at an altitude of about 10km (6.2 miles), close enough to make contact with Philae but not so close as to fly in heavy dust. A pass as low as 8km will be made and might turn up evidence of the lander, but on 1 or 2 December the spacecraft will be taken up to about 20km as it continues to track 67P towards its closest pass to the Sun.

The mission has in any case brought comparison to the Apollo Moon landings for technical prowess. In the 10 years since launch, Rosetta travelled 6.4 billion kilometres through the Solar System before arriving at the comet on 6 August 2014, and the soft landing by Philae was the first on a comet. During that 10-year trip to rendezvous with 67P, which spends much of its orbit around the Sun beyond Jupiter, Rosetta spent an extended time in hibernation, effectively shut down and with no contact with its controllers, and relied on three gravity-assist fly-bys of Earth and one of Mars to reach the comet.

The comet will reach its closest distance to the Sun on 13 August 2015 at about 185 million km, roughly between the orbits of Earth and Mars. Rosetta will follow it throughout the remainder of 2015 as it heads away from the Sun and activity begins to subside.

With data gathered by Rosetta and Philae, scientists hope to reveal secrets of the origin of the solar system, and even of life on Earth, as comets are possibly the oldest fragments of the early Sun’s early environment.