FARNBOROUGH: In space, two years can take forever - or go by in a flash

In space, two years can take a very long time – or it can go by in a flash, depending on one’s perspective. As seen from the European Space Agency’s mission control centre in Darmstadt, Germany, the past couple of years have been elongated by many a nail-biting eternity as a small spacecraft named Rosetta has closed on, intercepted and interacted with a comet hurtling towards and around the Sun. As seen from ESA headquarters in Paris and the engineering offices of hardware suppliers scattered between the UK, Italy and Russia, the coming two years will very short indeed, as they strain to keep their ExoMars rover mission on its new, delayed timetable.

These two European missions say pretty much everything about space exploration: expensive, vulnerable to delay or failure, reliant on partners and politics, exhilarating.

In the case of Rosetta, when the aerospace industry last gathered at Farnborough the ESOC (European Space Operations Centre) team at Darmstadt were on full alert. The spacecraft – about the size of a hatchback car – was closing in on its target at a rate of some 800m/s, after a 10-year, 6 billion km (4 billion mile) journey involving five trips around the Sun, three slingshot fly-bys of Earth and a fourth of Mars. Much of that journey had been spent in hibernation – there was no communication with the spacecraft, to preserve fuel and power in deep space – until its January 2014 automated “wake up” roused Rosetta, and the ESOC crew, into activity.

In the event, the August rendezvous with comet 67P/Churymov-Gerasimenko proved spot-on, and the time since has been spent flying “orbits” around this Mont Blanc-sized piece of space rock, shadowing it through its closest approach to the Sun (don’t fly through the comet’s tail, though, as that plume of dust and gas could destroy the spacecraft) and, now, on its path back towards the orbit of Jupiter.

Plenty of nail biting in November 2014, when they steered Rosetta to just a few kilometres from 67P to drop a small lander, Philae – which, despite a part-failure on “landing” was coaxed into providing much useful data from the surface. For another reminder that nothing can be taken for granted in deep space, the end of May just gone saw a “safe mode event”, which actually means contact with Rosetta was temporarily – agonisingly – lost. The ground team suspects the spacecraft’s star trackers, which keep its antennae pointed to Earth, got confused by dust from the nearby comet. As the Rosetta blog noted: “The dramatic events of the weekend are a stark reminder of the dangers associated with flying close to the comet, and highlights the risks the spacecraft will face during the final few weeks of the mission as it descends even closer to the comet.”

Those final weeks will culminate in September when the mission well and truly ends – with a controlled crash into 67P, for one last blast of data-gathering. At that point, no doubt feeling like they’ve aged by a decade while keeping tabs on Rosetta, the team will presumably go into hibernation themselves.

Not so their colleagues at ExoMars, a two-part European-Russian mission that will be heating up dramatically this summer. Part 1 launched in March and is now zinging towards a 19 October meeting with Mars; on arrival, a satellite – the ThalesAlenia Space-built Trace Gas Orbiter – will start its study of the Martian atmosphere and a fixed position lander will drop to the surface, to trial descent and landing technology.

So far so good but, apart from the current flight, the broader ExoMars scheme has not gone so smoothly. First, a budget-stressed NASA had to drop out, which opened the way for a partnership with Roscosmos, which is providing the transport – the March launch via Proton rocket was from Baikonur – and some payload instruments. 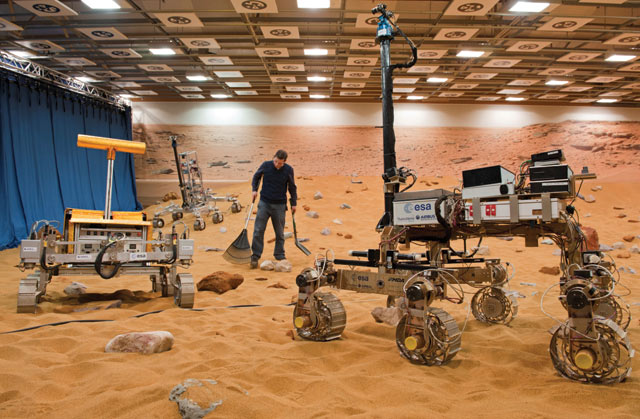 Bridget and friends in Airbus's Mars Yard in Stevenage

The second half of the mission, however, has proved more challenging, and a planned 2018 launch has been pushed back to 2020; Mars and Earth are at their closest every two years, and the hardware simply isn’t going to be ready for 2018. The Russians are supplying a surface platform and Europe – led by Airbus Defence & Space, in Stevenage, UK – the rover. With the first part of the mission enroute, it was decided in May to delay part 2 until the next launch window.

That new timetable is being described as “realistic”, but the engineers – and ESA bosses reporting to their member state governments, who hold the purse-strings – will no doubt be feeling that time passes rather more quickly than they would like during the next couple of years.

Meanwhile, however, visitors to the Farnborough air show will be able, courtesy of Airbus Defence & Space, to inspect a model of the ExoMars rover, to be hosted in exhibition space shared by the UK Space Agency and ESA. Affectionately known as Bridget and being designed to drill an unprecedented 2m below the surface to gather pristine samples for test in an onboard biological laboratory, she has been undergoing trials in a dedicated “Mars yard” at Stevenage. Critically, given the 20-plus minutes’ radio lag between Earth and Mars, Bridget will be given destination instructions but have to pick her own route and drive herself there, autonomously.

Given the enormous expense and difficulty of reaching Mars at all, and given the very real prospect of equipment failure owing to harsh Martian conditions or just bad luck, every second on the surface is precious. Hence it is neither realistic nor prudent to think in terms of driving Bridget from Earth, like a remote-control car. So, much work in the Mars yard is being done to ensure that she is able to identify obstacles and plan paths around them. Ideally, through her cameras and other sensors, she will even have to be “smart” enough to stop and call home for instructions if she spies anything enroute that might be interesting to the scientists back on Earth. The huge volumes of data that will be sent back could not possible be evaluated in real time, and days or months could pass before researchers realise they’d driven right past a prime target for investigation – by which time Bridget could be too far out of range to back-track, or even out of action.

Apart from being a technological tour-de-force, ExoMars is also an important proving ground for Euro-Russo collaboration in space exploration. The partners have big plans – ESA is supporting Russia’s Luna 27 and 28 robotic missions to the Moon, which could lift off this decade.

To that end, ESA director general Jan Woerner’s appearance at Farnborough will, quite certainly, be out of this world. He is obviously enthusiastic about Mars, but has also got sights set on the Moon – and the Luna missions are just a start.

Looking beyond the International Space Station – and whether or not Europe joins partners USA, Russia, Japan and Canada in supporting a proposed four-year service life extension to 2024 remains an open question that should be resolved this year – Woerner has been championing what he calls a “Moon village”. The Moon may seem like a sideshow, given that so much international attention is focussed on human-crewed Mars missions in the 2030s. But Woerner, recognising that obstacles in the way of any scheme to visit Mars may prove daunting, believes – clearly, with passion – that some form of Moon infrastructure is a viable way to build upon the ISS legacy of international collaboration.

As Woerner has explained it, a Moon presence, probably on the lunar South pole, with access to the “dark side” – would give all spacefaring nations, working alone or in partnerships, the opportunity to test technologies and carry out research. Human crews, he muses, could also be part of the mix.

Woerner, who headed up Germany’s DLR aerospace agency until succeeding Jean-Jacques Dordain last year, will be making his first Farnborough appearance at head of ESA. As befits the role, he is an inspiring thinker with a well-crafted vision of technology and society, not to mention an endearing sense of humour. Expect a glimpse of the future.