FARNBOROUGH: On Mars, exploration is a job for robots - and humans

Farnborough air show visitors to the Space Zone in hall 1 were treated to a good show – an Airbus Defence & Space-developed six-wheeled Mars rover named “Bruno”, trundling back and forth over a big square of orange indoor-outdoor carpet and few hand-placed rocks. One of the young engineers at the remote controls was Catherine Bateson, pictured with Bruno, who works on developing the machine - including its sibling Brian, who plays in the "Mars yard" simulation area at Airbus in Stevenage. Her job is easier, or at least more comfortable, than that of counterparts building the version that will launch for Mars in 2020 – they have to wear biohazard suits to work in the new clean room in Stevenage, to protect Bruno and Brian's Mars-bound brother from the biohazard that is human contact. 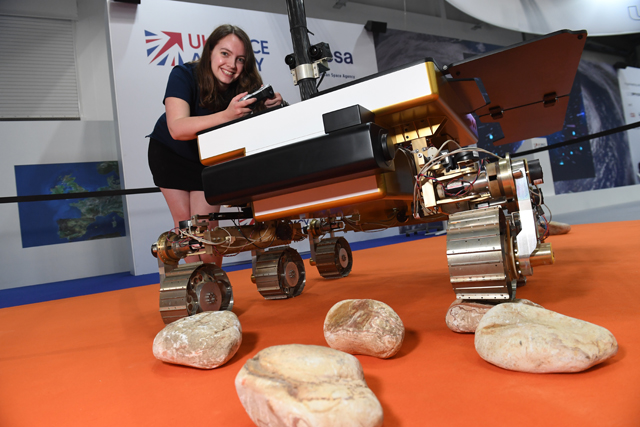 There is, of course, nothing easy about a mission to Mars. The whole point of going is to learn about the Red Planet and try to figure out if there is – or ever was – life there. So it defeats the purpose, as well as breaching international treaties on planetary protection, if hardware is carrying any Earthly microbes.

Adjacent to Brian’s carpet patch a panel session was held on new challenges in spaceflight, where European Space Agency director for human and robotic exploration David Parker was quizzed on the biohazard challenges of any prospective human missions to the Red Planet. His answers bear some consideration. First, he says, international planetary protection treaties state that governments are responsible for not contaminating any non-Earth body they – or any private company under their remit – may visit. So it has to be assumed that missions to Mars will be safe: safe, that is, for Mars and, in the event of a there-and-back mission, safe for Earth. In the case of Bruno's follow-on, Airbus is working in what is the most sophisticated clean room in Europe, if not the world.

When ESA took on Parker – who had been head of the UK Space Agency – they gave him the combined responsibility for human and robotic exploration. That’s a tall order, covering everything from visits to the International Space Station to the upcoming BepiColombo joint mission to image Mercury, with the Japanese space agency JAXA. And then there's the 2020 ExoMars mission, which will be the rover's ride to our most intriguing planetary neighbour.

But Parker has more than just a long job title. Human missions may not happen until the 2030s but, he says, planetary protection is already being taken very seriously. Don’t expect astronauts to trample all over Mars in spacesuits that have inevitably touched human hands. Rather, he says, some regions of the planet may be deemed accessible to astronauts, but more sensitive zones will only be explored by robots under human control.

That says Parker, will mean a “stepwise partnership” between humans and robots.