Sir Richard Branson stole the show yesterday - swooping in by helicopter and all but renaming the event the Farnborough space show with a star-studded presentation of his Virgin Galactic SpaceShip2 and a bold plan to use the system to slash the cost of launching small satellites.

With guests ranging from US aerospace industry association head and former Federal Aviation Administration boss Marion Blakey to US trade undersecretary Francisco Sanchez and RAF chief of staff Sir Stephen Dalton - not to mention his mother Eve, namesake of the carrier aircraft that launches SpaceShip2, and daughter Holly, the model for the Virgin Galactic girl logo, Branson declared that Virgin Galactic was the most promising business he's ever started.

To prove his point, he unveiled plans to swap SpaceShip2 for a liquid-fuel two-stage rocket to launch small satellites by air-drop from 50,000 feet - quickly and for less than $10 million. LaucherOne - under development in-house and in partnership with the US Defence Advanced Research Projects Agency - is promised for test flights in 2015 and commercial services in 2016.

Branson is bullish because Virgin sees a huge market opening up through the commercialisation of services other than telecommunications. Earth observation - and not just for spy services - and science are just a couple of the opportunities that LauncherOne can open up by cutting the cost of access to space.

But first, Branson couldn't resist a dig at arch-rival and Olympics sponsor British Airways. Explaining that a busy US test flight schedule prevented him from bringing the real SpaceShip2 and carrier aircraft WhiteKnight2 to Farnborough, Branson considered the London games opening ceremony next month and mused: "Wouldn't it be great to make a fly-by?" 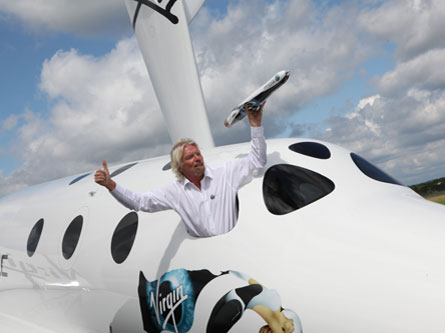