ILA: DLR looks to the future with LamAiR concept

At German aerospace research agency DLR, modern composite technology is finally catching up with a 1970s fast jet vision of the future – to slash airliner fuel burn by up to 13% by using forward-swept wings.

As the name suggests, achieving laminar airflow over the wings is the key to the Laminar Aircraft Research, or LamAiR, project. The model at the agency’s display in ILA’s Space Pavilion is of what would be an Airbus A320-size aircraft, designed to cruise at the same Mach 0.78 but with 18% less aerodynamic drag owing to the natural laminar flow over the forward-sweeping wings.

According to DLR aerodynamics researcher Martin Kruse, that drag reduction would translate into a 9% fuel burn improvement with the rear-mounted engine configuration studied in detail to-date. Some fuel economy benefits are lost to the extra structural mass needed for the T-tail, and to strengthen the fuselage for engine mounting and bending around the wings. But, he says, further aerodynamic work could move the engines to the standard under-wing position, to improve the centre of gravity and take some bending load off the fuselage – cutting mass enough to bump fuel savings up to 13%.

In any case, the key to LamAiR lies in modern carbon composite construction. Clever orientation of carbon fibres can overcome the inherent structural shortcoming of forward-swept wings – aerodynamic lift forces on the wing tips are excessive and self-reinforcing, possibly leading to stall or even breakage. Kruse points to the Grumman X-29 – which employed carbon composite construction to tailor its forward-swept wings’ aeroelasticity – and the Sukhoi Su-47 as predecessors to the LamAiR concept. 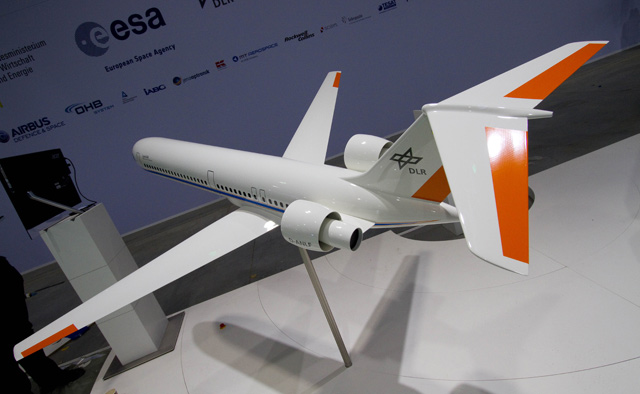 DLR first revealed details of its LamAiR study in the wake of moves by Airbus and Boeing to launch re-engined versions of their A320 and 737 narrowbodies. Kruse readily acknowledges that the A320neo and 737 Max programmes are pushing back the timetable for any true next-generation airliner, but he underscores DLR’s readiness to take the next step and turn LamAiR into a production-ready design: “If you asked us, we could start tomorrow!”

Were Airbus to take up DLR’s offer to develop LamAiR, it would not be the airframer’s first experience with forward-swept wings. Some 50 examples of the Hans Wocke-designed Hamburger Flugzeugbau HFB-320 Hansa Jet were built between 1964 and 1973 – on the site which today hosts Airbus’s Hamburg A320 final assembly line.

Though a few light aircraft models, and some gliders, have been built with shoulder wings forward-swept, the Hansa Jet remains unique as a civilian jet aircraft with forward-swept wings mounted low. For the business jet, one advantage of the configuration was to push the wing spar behind the passenger cabin.