India has joined a very exclusive club of spacefaring nations with the successful arrival of its Mars Orbiter Mission.

Named Mangalyaan – “Mars craft” in Sanskrit – India’s orbiter spent 300 days en route. It will now be readied for its scientific mission to study the planet’s atmosphere and geology with five sensors that have a combined mass of just 15kg (33lb).

Whatever Mangalyaan’s contribution to our understanding of Mars, the mission will be remembered for its primary achievement of reaching the red planet at all – a feat that in 50 years of attempts has been matched only by the USA, the Soviet Union and the European Space Agency, which between them racked up as many failures as successes at a notoriously difficult destination for spacecraft.

On its first Mars attempt, the Indian Space Research Organisation (ISRO) also managed the feat – rare for a high technology programme in India – of working to schedule and within budget. As that budget was a mere $72 million, ISRO’s demonstration that it has the mission planning, operations, communications and navigation skills to successfully design a spacecraft that can perform Earth-bound manoeuvres, survive a cruise phase of 300 days in deep space and reach Mars is all the more creditable.

India’s arrival nearly upstaged NASA, whose Mars Atmosphere and Volatile EvolutioN (MAVEN) orbiter arrived 72h earlier. Packed with sophisticated instruments to study the interaction of the Martian atmosphere to solar wind, MAVEN should shed some light on what happened to the liquid water believed to have once flowed in abundance on Mars’s surface. Also, as it costs some eight times as much as Mangalyaan, MAVEN has in any case underscored India’s budgetary triumph.

In India the mission has been criticised as money that could have been better spent on people at home, but in marking ISRO's arrival as a world-class space agency it clearly stands as a touchstone of pride– as seen in Prime Minister Narendra Modi's embrace, pictured, of ISRO chairman K Radhakrishnan at mission control in Bengaluru. 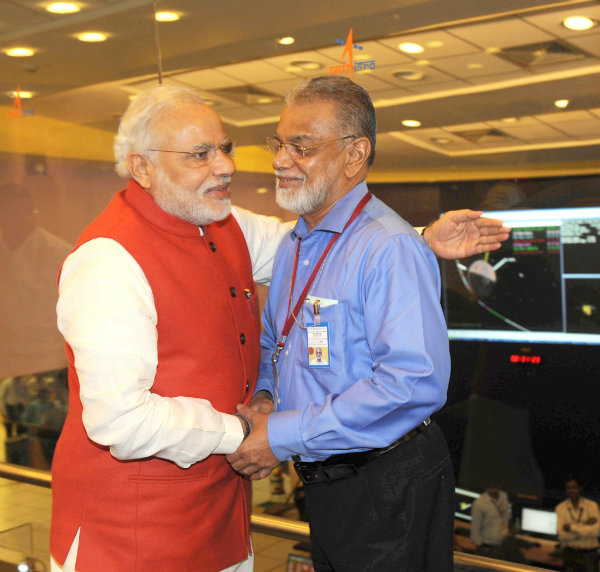 For ISRO, success seemed within reach two days before the 24 September arrival, with the successful test burn of Mangalyaan’s 440N liquid apogee motor (LAM) – a crucial milestone, as it had not been fired since 1 December last year. The orbital insertion operation then saw the LAM fired alongside eight smaller liquid engines for approximately 24min. The burn imparted a braking velocity of 1098.7m/s to the spacecraft, slowing it sufficiently to enter Mars orbit.

Throughout its 300-day journey in space, the ISRO’s Mars orbiter has proven itself to be a tough and reliable spacecraft, a result of ISRO choosing to stick to its flight-proven IRS/INSAT/Chandrayaan-1 bus and reliablePSLV launch vehicle. The major modifications were related to communication, power and propulsion systems, for LAM restart after 10 months.

Mangalyaan will now move to its next phase, which will see it utilising its five scientific payloads for experiments. These consist of a camera, two spectrometers, a radiometer and a photometer. These will be used to observe the “Martian surface, atmosphere and exosphere extending up to 80,000km, for a detailed understanding of the evolution of that planet, especially the related geologic and the possible biogenic processes on that interesting planet”, ISRO says.