Orbital Sciences successfully docked its Cygnus cargo capsule with the International Space Station (ISS) for the first time on 29 September, becoming only the second company to do so.

The docking was delayed several days following a minor Global Positioning System data mismatch between Cygnus’ and ISS’ onboard computers. A software patch to Cygnus resolved the situation, but a further hold was imposed while astronauts focused on docking a Russian Soyuz resupply capsule.

The capsule will remain attached several days as astronauts unload the roughly 1,300lb of supplies, before detaching and burning up during reentry to Earth’s atmosphere.

The docking marks the culmination of a long, slogging programme for Orbital Sciences, including the design, construction and launch of the unique Antares launch vehicle and associated headaches.

The capsule launched on 18 September from Wallops Island, Virginia, aboard the Antares. It marked only the second Antares launch and the first for Cygnus 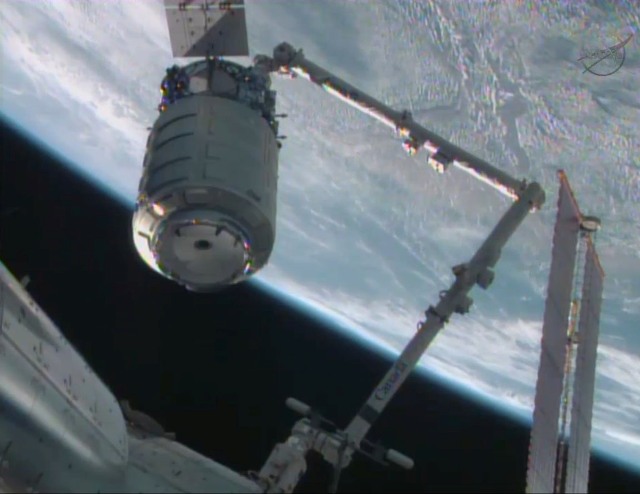 “A tremendous amount of hard work has gone into this five-year effort from our launch vehicle and spacecraft teams, and we are all exceptionally proud of their accomplishments,” says Orbital chief executive David Thompson. “We look forward to moving ahead with regularly scheduled ISS cargo delivery missions for NASA as early as the end of the year.”

The September flight marks the final test flight for Orbital under the Commercial Orbital Transportation Service (COTS) programme, run by NASA to develop a US-based commercial resupply capsule. Competitor SpaceX, which has previously docked with ISS, was also funded under the programme.

With COTS finished, Orbital will move on to the Commercial Resupply Services (CRS) programme, by which NASA will contract for eight resupply flights to ISS. One CRS launch is scheduled before the end of 2013, but delays for such launches are not unusual.

The fourth flight will see the launch of an enhanced Cygnus capsule, capable of carrying more cargo.