Airbus Group chief executive Tom Enders took the controls of the two-seat Perlan II glider during a 10min test flight on 7 May from the windswept, high-desert airport in Minden, Nevada, raising the public profile of a volunteer team of aviation adventurers hoping to make history in about four months.

Afterwards, Enders – a licensed helicopter pilot and skydiving enthusiast – pronounced the Airbus-sponsored composite vehicle ready to achieve the Perlan team’s goal of shattering the winged altitude record of 85,069ft set by the Lockheed SR-71 Blackbird in 1976, using a unique and barely understood weather phenomenon instead of afterburning engines to lift two pilots as high as 90,000ft over the southern tip of Argentina.

“I have every confidence that [chief pilot] Jim [Payne] will make the 90,000ft in Argentina, if not more,” Enders says. 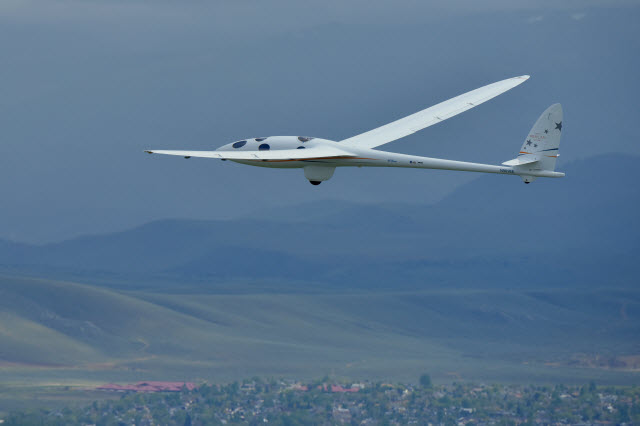 The volunteer team of Perlan pilots, engineers and scientists are no less enthusiastic about the endeavour, but seem more cautious about the challenges that still confront them.

The flight test programme, for example, is behind schedule. An unusually rainy winter and spring in northwest Nevada has made it difficult to fly the Perlan, which must keep the 25.6m (84ft)-span wing dry to maintain laminar flow and glide ratio. They are also battling leaks by the onboard rebreather system, which risks elevating pure oxygen levels inside the pressurised cockpit beyond safe limits.

But the team is working to resolve both problems by the end of July, allowing the Perlan to attempt a series of record flight attempts from El Calafate, Argentina, beginning in August. 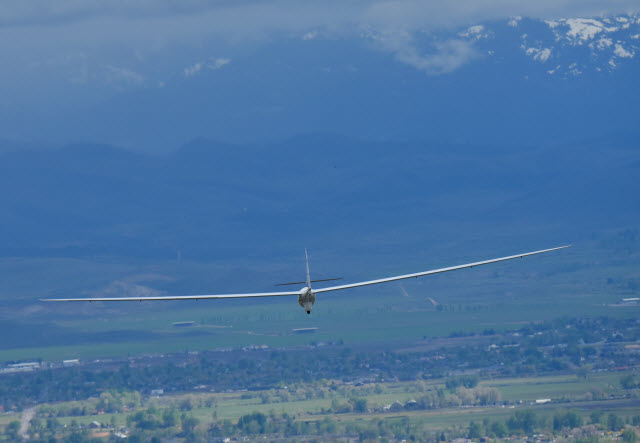 Lacking engines, meteorology is as material to the Perlan mission as aerodynamics – particularly a phenomenon glider pilots call “wave”. It occurs when wind currents above 20kt (37km/h) rise over the tops of a long mountain range, then plunge steeply down the other side. As the current nears the ground, the wind turns sharply upward again, rising in the Sierra Nevada range to somewhere above 30,000ft, capped only by the tropopause layer between the troposphere and the stratosphere.

A global community of glider pilots has learned how to ride the updrafts of these oscillating wind currents on hours-long flights to altitudes usually reserved for jet-powered aircraft.

The founder of the Perlan mission, former US test pilot Einar Enevoldson, discovered these same wave currents can rise significantly higher under the right conditions. In addition to the jetstream, arctic skies are also visited by the polar night jet. Revolving around the polar vortex, this is strong enough to scatter the boundary between the troposphere and the stratosphere, clearing the way for waves of oscillating winds to rise as high as 120,000ft.

The southern tip of Argentina offers an ideal location to attempt flights up to 90,000ft. In 2007, Enevoldson, now 86, and the late aviation adventurer Steve Fossett set an altitude record of 51,000ft from El Calafate in a non-pressurised DG-505m glider.

Equipped now with a pressurised cockpit and a wing optimised for true air speeds of 260kt at 90,000ft, the Perlan II team hopes to blow away the altitude records set by the powered Lockheed U-2 and SR-71 spy aircraft.

In addition to the adventure, the Perlan’s sponsors, which include Airbus and United Technologies, also hope to contribute to science, as a flying laboratory able to spend hours flying autonomously in atmosphere that has never been systematically measured. It could also help Airbus understand flight dynamics above 45,000ft, where more commercial aircraft could be driven as airspace in the troposphere becomes more congested, says Ken McKenzie, senior vice-president of strategy and corporate development for US-based Airbus Group Inc.

But the Perlan mission is also subject to grave risks. The same lifting force used to carry the Perlan aloft also creates a powerful “breaking wave” at its crest, with air so turbulent it could rip the wings off the glider. If the glider is caught in a breaking wave, the Perlan’s designers added a tail-mounted drogue chute to steady the aircraft and reduce its speed. At 90,000ft, the difference between stalling speed and maximum speed of the Perlan is 6kt. If a drogue chute fails, a fuselage-mounted airframe parachute will deploy, allowing the Perlan to descend slowly to the ground.

But the Perlan team is well aware of the risks of flying an unpowered aircraft so near the edge of space. Ed Warnock, chief executive of the $7 million Perlan project, established careful criteria for selecting volunteer test pilots of the glider.

“We really need to recruit old people who don't care [about dying],” Warnock says, “or really young people with no children”.