Rocket Lab successfully caught in mid-air a piece of its first stage Electron rocket while it was parachuting down to Earth as part of a recovery demonstration.

The test took place in early March over the open ocean near New Zealand, the company says on 7 April. Rocket Lab manufacturers small rockets for launching small satellites. The firm wants to reuse rocket stages that it recovers to save time and money by not having to rebuild the hardware. 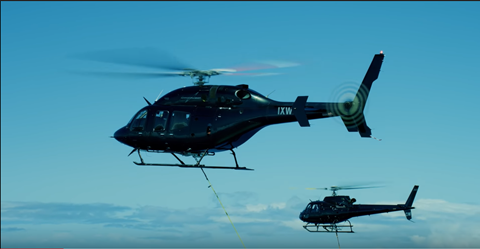 The “test stage” that was recovered did not appear to be the full first stage of the Electron rocket.

Rocket Lab says it added recovery equipment to its two most recently used rockets, launched in December 2019 and January 2020. With those launches it has been practicing the process of steering the rocket’s reentry and recovery.

“Both stages on those missions carried new hardware and systems to enable recovery testing, including guidance and navigation hardware, S-band telemetry and onboard flight computer systems, to gather data during the stage’s atmospheric re-entry,” says Rocket Lab. “One stage was also equipped with a reaction control system that oriented the first stage 180° for its descent, keeping it dynamically stable for the re-entry. The stage slowed from more than [3,780kt (7,000km/h)] to less than [486kt] by the time it reached sea-level, maintaining the correct angle of attack for the full descent.”

For its next test, Rocket Lab will try to recover and then refurbish a full Electron first stage.

“The stage will not be captured mid-air by helicopter for this test, but will be equipped with a parachute to slow its descent before a soft landing in the ocean where it will be collected by a ship,” the company says. “This mission is currently planned for late-2020.”