The European Space Agency's Rosetta comet-chasing mission has taken another dramatic turn with the awakening after seven months of hibernation of the lander it sent down to the surface of 67P/Churyumov-Gerasimenko – which had operated for just 60hr before running out of power.

The lander, Philae, made history as the first spacecraft to touch down on any celestial body other than a planet or moon but while it hit its intended landing spot on 67P, an anchoring system failure let it bounce, apparently against a formation of the irregularly-shaped comet that left its solar panels in the shade.

Batteries soon ran out but with Rosetta continuing to orbit and track 67P, the lander team at Germany's DLR aerospace centre remained hopeful that, as the comet's path took it closer to the Sun, there would eventually be enough light to charge Philae's batteries. Those hopes came true when Philae made contact with its ground team, via Rosetta, for 85sec on 13 June, for the first time since it shut down in November.

Philae project manager Dr. Stephan Ulamec declared the lander – equipped with a range of instruments for studying the composition of the comet – to be "ready for operations". He added that Philae also must have been awake earlier: "We have also received historical data – so far, however, the lander had not been able to contact us earlier."

Ulamec and his team have so far had access to 300 data packets, but another 8,000 are in Philae's memory.

When Philae went quiet after its partially successful landing, prospects for reawakening were deemed remote; the comet's approach to the Sun would increase the intensity of the energy reaching Philae's solar panels, but much depended on how much dust – which creates a comet's distinctive tail – ended up contaminating the panels.

The comet will reach its closest distance to the Sun on 13 August 2015 at about 185 million km, roughly between the orbits of Earth and Mars. Rosetta will follow it throughout the remainder of 2015 as it heads away from the Sun and activity begins to subside.

For technical prowess, the mission has brought comparison to the Apollo Moon landings; in the 10 years between launch and rendezvous, Rosetta traveled 6.4 billion kilometres through the Solar System before arriving at the comet on 6 August 2014, and the soft landing by Philae was the first on a comet. During that 10-year trip to rendezvous with 67P, which spends much of its orbit around the Sun beyond Jupiter, Rosetta spent an extended time in power-saving hibernation, effectively shut down and with no contact with its controllers, and relied on three gravity-assist fly-bys of Earth and one of Mars to reach the comet.

With data gathered by Rosetta and Philae, scientists hope to reveal secrets of the origin of the solar system, and even of life on Earth, as comets are possibly the oldest fragments of the early Sun’s early environment. 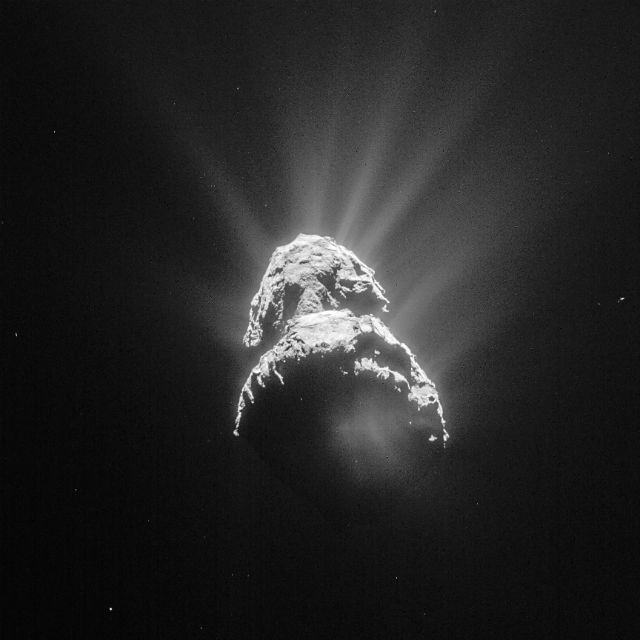 Comet 67P as seen by Rosetta