SpaceX has pulled of a monumental feat in aerospace engineering by landing its upgraded first-stage Falcon 9 rocket booster at Cape Canaveral, Florida, while successfully putting 11 Orbcomm communications satellites on orbit.

In the 20th space flight for the Falcon 9 launch vehicle and 6th launch this year, the company won over its doubters by reigniting the first-stage booster stage upon re-entry and bringing it back down to Earth.

“It’s like launching a pencil over the Empire State Building, putting it in reverse, and having it come back down and land on a shoebox on the ground in a wind storm,” says one SpaceX commentator during the historic attempt. “This stuff is super, super hard,” says another. 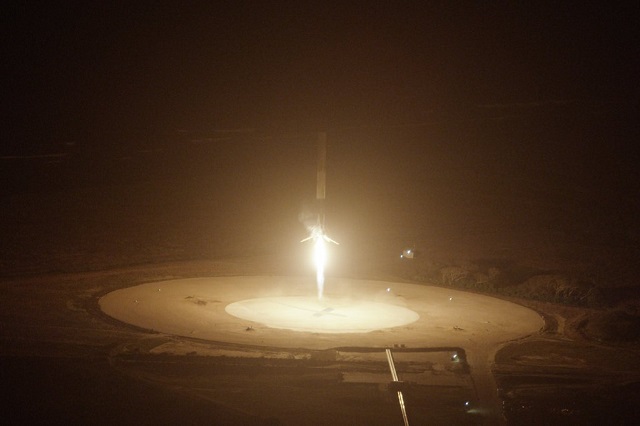 The launch had been scheduled for yesterday, but the mission was rescheduled because of a 10% higher chance of success on 21 December due to the weather conditions.

It was the company’s first flight since the June 28 failure that destroyed the company’s Dragon supply ship destined for the International Space Station, which cast a long shadow over the entire SpaceX operation.

The company had expected to return to flight with its improved Falcon 9 in September, but now the rocket has successfully returned to routine operations with an improved rocket and a historic milestone in its back pocket. The company couldn’t afford to miss this opportunity after being approved to carry national security space modules for the US Air Force earlier this year.

The new launch vehicle has increased performance “due mostly to increased boost thrust, deep cryo oxidizer and a much larger upper stage engine bell” along with reliability enhancements, such as a redundant stage separation system and higher structural safety margins, according to the company.

The achievement of landing the booster stage comes just one month after Blue Origin made history by vertically landing and recovering its New Shepard suborbital launch vehicle – designed to deliver tourist and science experiments into space.

SpaceX aims to dramatically lower the cost of space launch by reusing its Falcon 9 first-stage rocket, starting with experiments with its Grasshopper test rig and continuing with several unsuccessful live tests.

The company had tried to land on its “autonomous spaceport” in the Atlantic Ocean, but this latest test was completed on dry land at Landing Zone 1 on Cape Canaveral.

Live online, company employees could be overheard chanting “U.S.A, U.S.A!” The roar only grew louder as officials declared the successful deployment of the 11th and final Orbcomm satellite.

“This has been a wildly successful return to flight for SpaceX, a wonderful first flight of our Falcon 9 upgrade, and of course, we made history today by landing the first stage of our rocket back on land at Cape Canaveral, Florida,” the commentator says.

“Remember, the goal is Mars, because nobody wants to go back to Jakku,” says another, in reference to the fictional Star Wars planet occupied by outlaws and thieves.

The launch was supported by the US air force's 45th Space Wing at Patrick AFB, and had been approved by the FAA.