Got any special plans for Sunday? 12 April might not rank up there with the really big holidays like Christmas, Easter and Black Friday, but all the same you could take a lead from our Russian readers and tip a glass to Yuri Gagarin - on Cosmonautics Day, celebrated since 1962 to mark the first human spaceflight a year earlier. Or, if you prefer a globally inclusive excuse to open the hatch and let loose, call it the International Day of Human Spaceflight, officially if belatedly sanctioned by the United Nations in 2011.

As UN secretary general Ban Ki-Moon puts it, the Glorious 12th "will remind us of our common humanity and our need to work together to conquer shared challenges. I hope it will also inspire young people in particular to pursue their dreams and move the world towards new frontiers of knowledge and understanding." Which covers pretty much everything.

So, to get the countdown started, here’s our own Flightglobal list of the top 10 firsts in human spaceflight:

Yuri Gagarin’s 12 April 1961 flight into legend was gutsy, for sure – and, if we're serious, at least somewhat foolhardy. Or even a lot foolhardy. Where the Americans tested the limits gingerly, putting a toe in the water a month later with Alan Shepherd’s suborbital sortie, the Soviets went for it big time, using their bigger rockets to push Gagarin and his Vostok capsule to a full orbital flight first time out. Thankfully, they didn’t also try to master re-entry and landing; Gagarin, pictured in a bus headed for the launch pad, was ejected at 23,000ft and parachuted home safely, while his capsule, parachute-retarded though it may have been, apparently left a big hole in the ground and bounced – all some 280km west of the planned touchdown site, near Baikonur, the launch site used by Russia to this day. 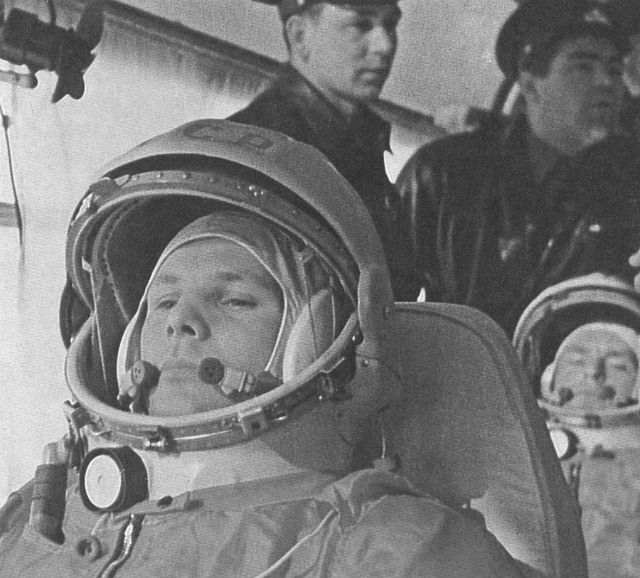 To much American annoyance and Cold War angst, former US Navy aviator Alan Shepard was not the first man in space, having been beaten to that prize, by less than a month, by Communists. He was, however, the first to get all the way back to the surface of the Earth inside his spacecraft, splashing down in the Atlantic ocean. Shepard’s Mercury-Redstone mission, which lasted just 15mins, was also the first human suborbital flight. Later, he made a second spaceflight, as captain of the Apollo 14 mission – in the process achieving a second important human spaceflight first, by hitting a golf ball on the Moon. 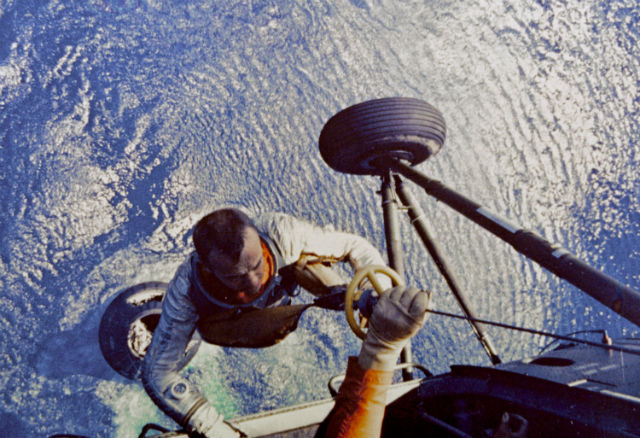 3. First civilian to fly in space

Valentina Tereshkova is better known as the first woman to fly in space. Nowadays, it seems rather passé to focus on gender (when the Space Station next passes over, wave to Samantha Cristoforetti – the first Italian woman in space is logged on as @AstroSamantha and packing a serious camera, so might even tweet your picture, or at least a picture of the ground where you’re standing), but it did take until 1983 for the Americans to launch a woman - and even then Sally Ride was a mission specialist, not a pilot. The Soviets may have recruited a group of female cosmonauts for propaganda purposes rather than any operational reasons, but Tereshkova – just 26 years old when she piloted Vostok-6 on 16 June 1963 – was already an experienced skydiver and clearly had the right stuff. Over three days she orbited 48 times and took scientifically useful photographs of the atmosphere. Later in 1963, she married fellow cosmonaut Andriyan Nikolayev, and their daughter was the first person whose parents had both been to space. Tereshkova went on to earn a doctorate in engineering and was active in Soviet and then Russian politics – and even helped carry the Olympic flag at the opening ceremonies of the 2014 Winter Games in Sochi. Recently, she is reported to have expressed a desire to travel to Mars – one-way or otherwise. 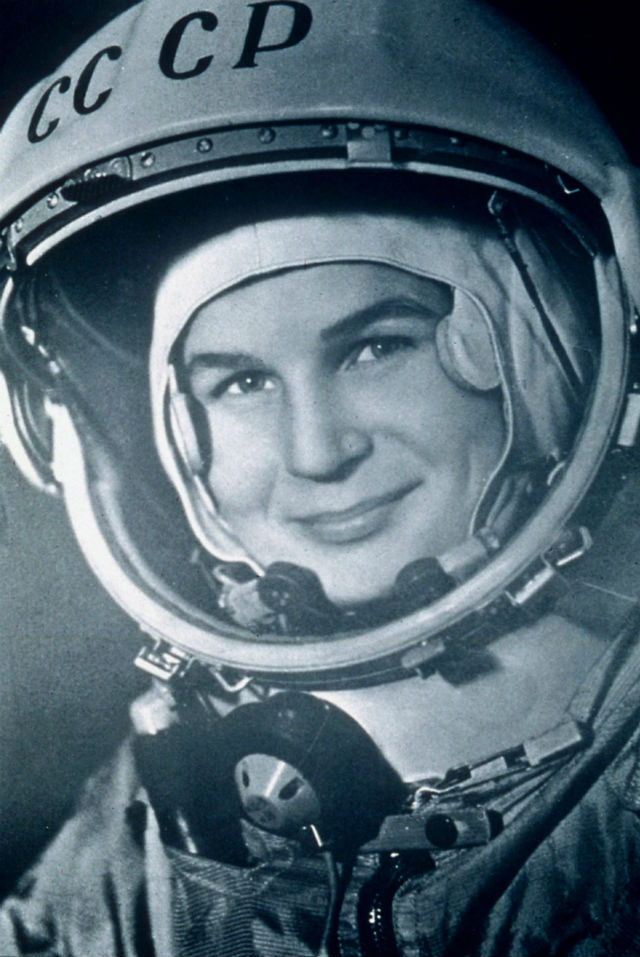 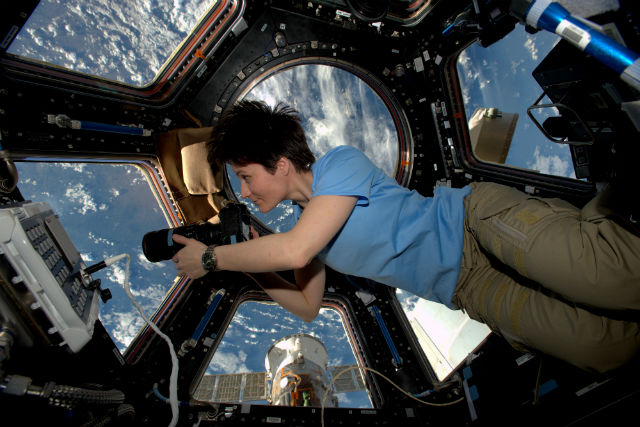 Don’t underestimate the hazards of going outside. Alexei Leonov notched up this particularly notable first during the March 1965 Voskhod 2 mission – but struggled to get back into the capsule as his suit had expanded during the “extra-vehicular activity”. Letting out some air solved that problem but left him, like a deep-sea diver coming up too fast, in decompression. Then, he and Pavel Belyayev struggled to operate their overly cramped spacecraft and missed their re-entry path to land way off course in dense forest. Once back on the ground, bears and wolves found them long before the recovery crew; no fools, Leonov and Belyayev waited for a day in the safety of their capsule. Leonov is pictured here in Moscow with Valentina Tereshkova, at a 2011 event marking the 50th anniversary of Gagarin’s spaceflight. 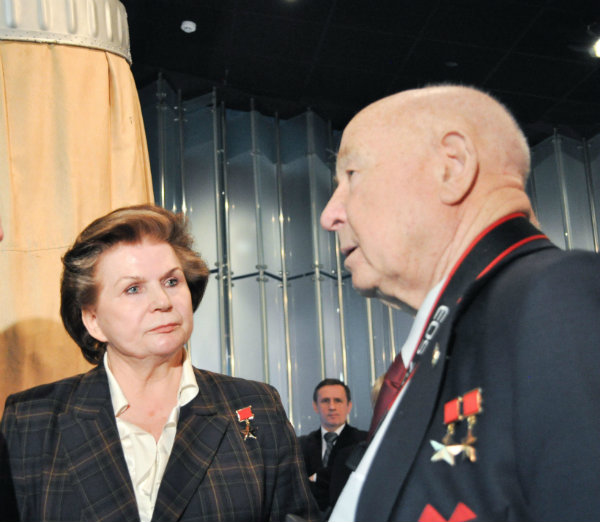 5. First death in a spaceflight

Space race-era US popular legend always had it that the Soviets were comparatively reckless with lives, a ridiculous boast even before two Space Shuttle tragedies chalked up a shocking 14 fatalities. Sadly, though, the first fatality in an actual spaceflight was indeed of cosmonaut Vladimir Komarov – shown here on a 1964 Soviet postage stamp – whose one-day Soyuz 1 mission of 24 April 1967 ended in tragedy with the failure of his re-entry parachute and a crash landing. 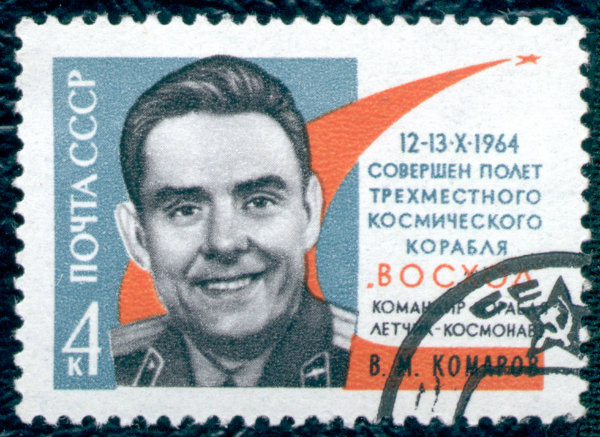 The first and to-date only fatalities in space – that is, above the internationally agreed 100km (62 mile) boundary – are the crew of Soyuz 11. On 30 June 1971, cosmonauts Georgi Dobrovolski, Vladislav Volkov and Viktor Patsayev died when their spacecraft lost pressure sometime after undocking from the USSR’s Salyut 1 space station after three weeks in orbit. They are depicted left to right on this memorial Soviet postage stamp, which reads “A feat by heroes will live on for centuries.” 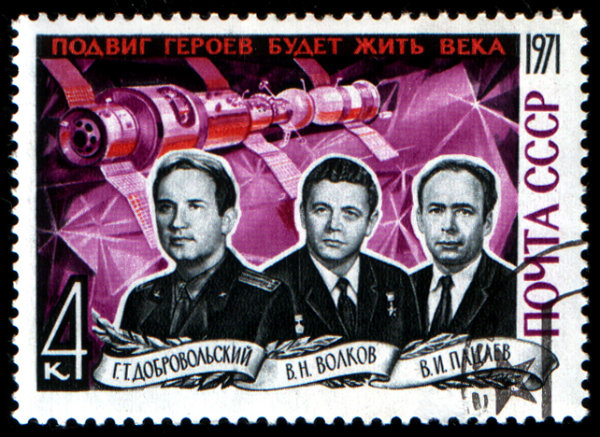 This was a biggie - bringing two spacecraft close enough to join them up requires both delicate control and a clear understanding of the physics of orbit; few missions since would have been possible without docking manoeuvres, but even with modern automation the joining up of two spacecraft is never taken for granted. Four months after Gemini 7 and Gemini 6A demonstrated the basics with a close rendezvous in December 1965, Neil Armstrong and David Scott aboard Gemini 8 succeeded in actually docking with an unmanned Agena target vehicle. Unfortunately, a thruster malfunction on Gemini forced the spacecraft into a consciousness-threatening spin, ultimately resolved by undocking and a demonstration of why, when it came to piloting, Armstrong really was the business. What was to have been a three-day mission ended after less than 11hr with a Pacific splashdown, half a world away from the primary recovery site. 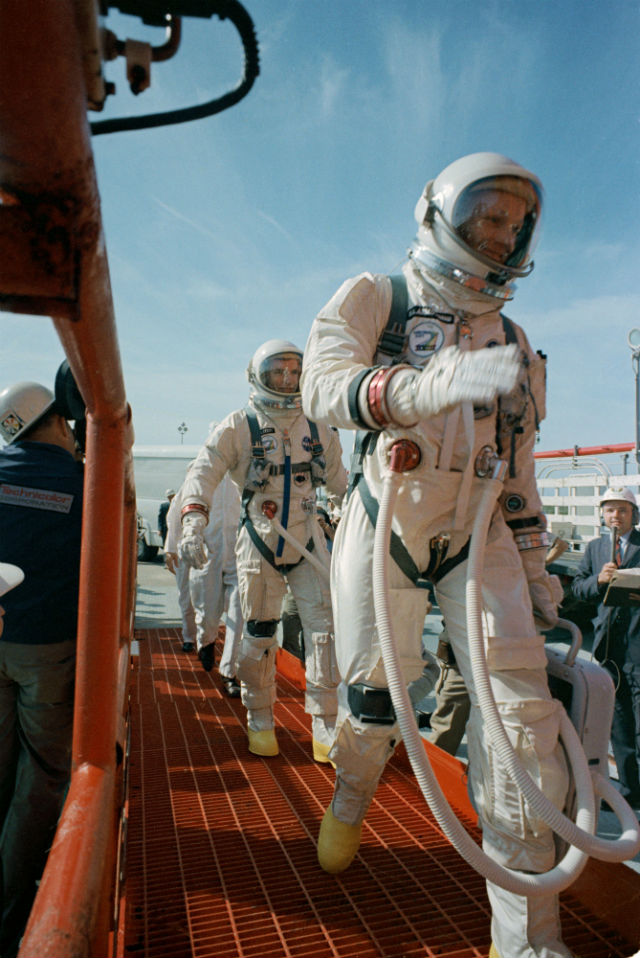 8. First men to the Moon

Apollo 8 could arguably be put up as the really great milestone in human spaceflight. During their December 1968 trip around the Moon, Bill Anders, Frank Borman and Jim Lovell were the first humans to go beyond low-Earth orbit and the first to see the whole of our planet, as one beautiful blue orb, so fragile against endless black space. The images are priceless. 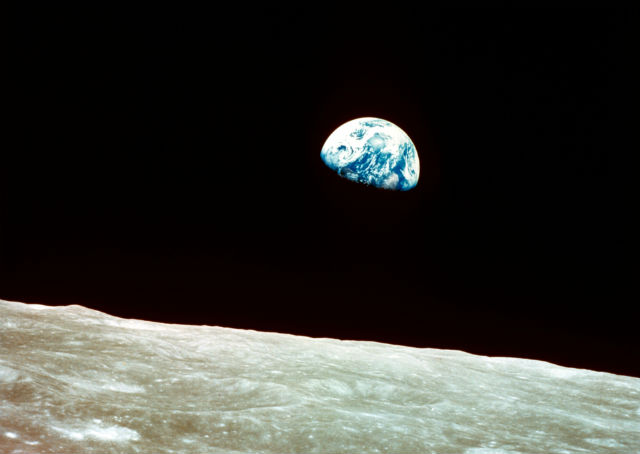 Earth, as seen for the first time

9. First men on the Moon

Apollo 11, 20 July 1969, first boots on another world: Neil Armstrong, Buzz Aldrin, Michael Collins. One small step for a man or the first strides towards new worlds? That was nearly 45 years ago, and Mars is a long, long way away. 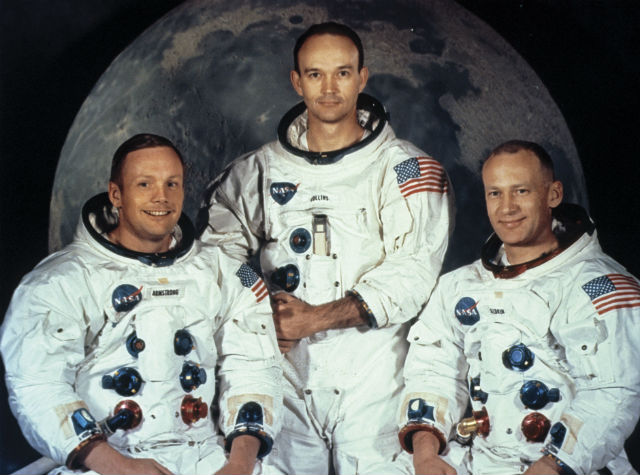 For everything else on this list, think superpower rivalry, big government money and national pride. But for those who believe that, ultimately, private actors will make the running in even the biggest of space ventures like colonising Mars, 21 June 2004 is a date for the history books. The air-launched rocketship SpaceShipOne, built by Burt Rutan’s Scaled Composites, carried pilot Mike Melvill beyond the 100km line formally recognised as the boundary of space – a first for a private project. The team went on later that year to make further suborbital flights to win the Ansari X-Prize for opening the private spaceflight era, and the project formed the technical basis for the bigger, more ambitious Virgin Galactic bid to make a business out of short trips above the atmosphere. 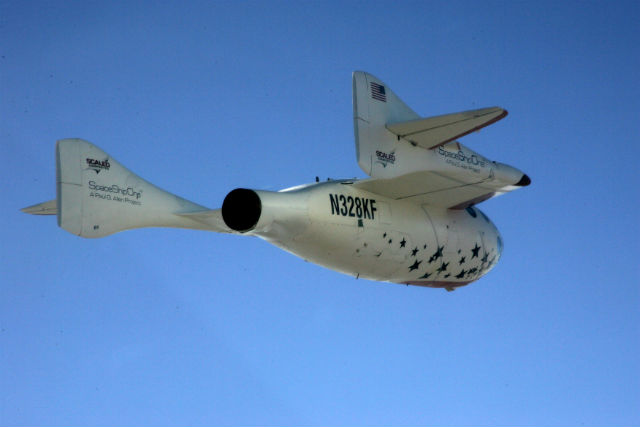 SpaceShipOne, gliding back to base

That’s hard to say; Virgin Galactic has yet to get anywhere near space and remains grounded after a fatal crash in October 2014 – and some commentators are speculating that boss Richard Branson will find a face-saving way to end the programme rather than risk the financial calamity that would follow an accident involving fare-paying passengers. Xcor’s Lynx two-person runway take-off and landing rocketplane may fly sometime soon, and others are talking about offering suborbital services but meanwhile, when it comes to human spaceflight, the biggest and only show on Earth is the very much not-privately funded International Space Station. 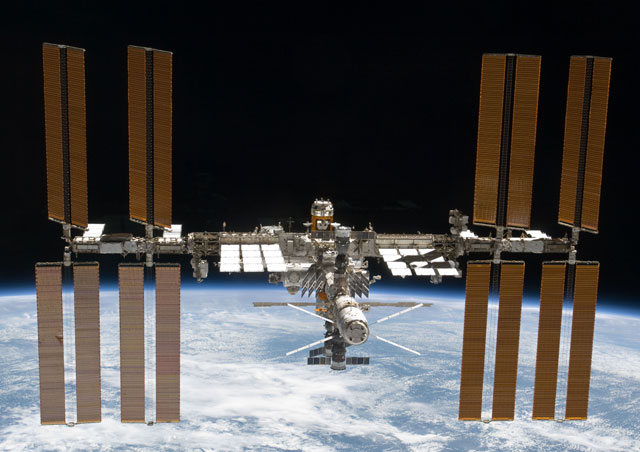 Here there be much government money