Virgin Galactic is focusing on the development of its next sub-orbital tourist spacecraft, following the fatal crash of the previous model in October 2014.

The Scaled Composites-developed SpaceShipTwo crashed on 31 October, claiming the life of one of the test pilots. A US National Transportation Safety Board investigation is under way and is expected to be complete some 12 months after the crash.

In the meantime, George Whitesides, chief executive of Virgin Galactic, says the second tail-numbered spacecraft is still under development. Testing is expected to begin in 2015, ahead of planned commercial operations in 2016.

The second version of the spacecraft – excluding the SpaceShipOne prototype that won designer Burt Rutan the Ansari XPrize in 2004 – was already two years into development at the point of the crash. The aircraft is 90% structurally complete and two-thirds along in terms of systems, Whitesides says.

The company is taking a practical approach to the crash and its subsequent focus on the development of the second aircraft, with Whitesides claiming that test flights are ultimately about learning.

“Accidents like the one we had are tragic, but they are actually the way that you advance aerospace technology. We had a bad day [and] Scaled [Composites] had a bad day; nobody should be under any illusion that the early flights of commercial space will be as safe as, say, the flight of a [Boeing] 747,” he says. “But that’s okay.” 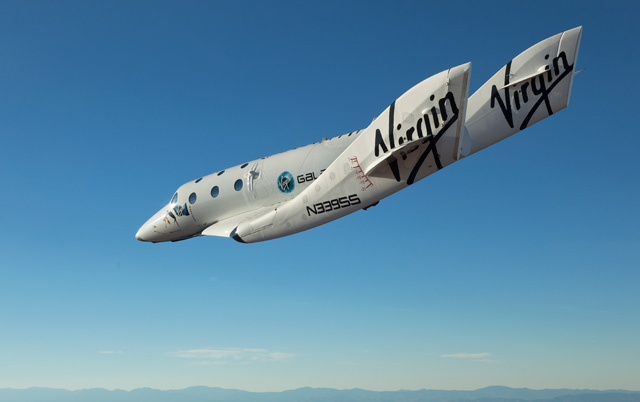 A process of “informed consent” will be used when commercial operations begin, with the risks of the technology disclosed to potential customers before they fly.

“I think that is the right posture for this moment in time for the industry,” Whitesides adds. “Without risk you take away the chance for big leaps forward. If all you do is incremental [changes] you aren’t going to start new industries and make new explorations.”

Development of the second vehicle has been ramped up as a result of the crash. Whitesides says: “I would say not hugely, but certainly – and unfortunately – we have the ability to add resource to the construction of the second spaceship now.”

The first vehicle was to be handed over by Scaled Composites to Virgin Galactic a few months after the October test flight. Testing designed to tailor the type to commercial operations was then planned, and the craft was earmarked as being the first to enter commercial operation.

The results of the NTSB investigation will be incorporated into the next vehicle, although Virgin does not expect any major changes to be made.

“The NTSB has already come out and discussed what they think was the initial cause, and so we don’t anticipate big changes, but to the extent that we need to do anything – like related to human factors and control systems – then we will do that,” Whitesides adds.

Virgin Galactic does not expect to have to repeat all the test points carried out on the previous craft because it is “roughly the same vehicle from a design perspective”, Whitesides says.“We’ll be able to make efficiencies in certain places, but we’ll also probably want to test a little more in other areas,” he adds.

The spacecraft is launched from a WhiteKnight mothership aircraft that flies it up to 50,000ft, the second of which is also under development. The company has also received authorisation to start building the third spacecraft.

Meanwhile, Virgin Galactic also hopes to make advances with its LauncherOne orbital launch vehicle this year. The system is also deployed from the WhiteKnight – carried in the same position as the spacecraft – but once released launches small satellites into orbit.

As well as suborbital travel, the company foresees a strong growth market for launching small satellites. LauncherOne is expected to enter testing in 2016, with commercial operations beginning in 2017.

“I think 2015 will be a year of rebirth for Virgin Galactic,” Whitesides adds. “We have made it through one of the toughest possible events and we’re still standing and absolutely committed to opening up space for all.”