Virgin Orbit is to conduct its next space launch from the California site at Mojave, as investigation into its failed inaugural UK mission progresses.

But it states that it expects to return to the UK’s Spaceport Cornwall, located in Newquay, and is holding discussions on potential opportunities which could emerge later this year.

Virgin Orbit has determined that the 9 January failure followed a premature ending of the initial burn of the launch vehicle’s second-stage engines.

The launch vehicle – carrying satellites on the first operation from Spaceport Cornwall – was successfully dropped from the carrier aircraft, a modified Boeing 747-400, in the specified airspace zone.

“Initial data assessments indicate that the first stage of the rocket performed as expected,” it states. 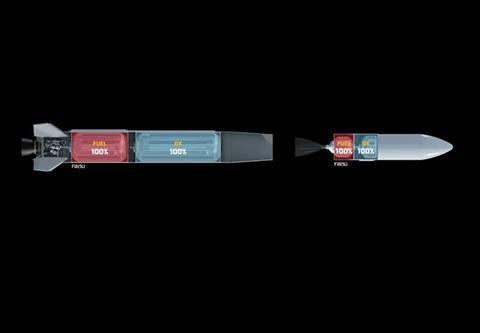 But at an altitude of around 180km the second stage “experienced an anomaly”, says Virgin Orbit, which prematurely ended its initial engine burn.

The craft failed to reach its intended orbit and the launch vehicle, along with its satellite payload, fell back to Earth.

Virgin Orbit states that the fall occurred within the designated safety corridor.

“Extensive telemetry coverage for the flight allowed for the collection of an enormous quantity of data during the mission,” it adds. This has enabled the company to carry out rapid analysis of the event.

This diagram shows how the UK mission should have proceeded

Virgin Orbit has commenced a formal investigation into the second-stage failure.

“An extensive fault analysis and investigation and completion of all required corrective actions identified during the investigation will be completed prior to the next flight,” it says, pointing out that, prior to the UK mission, each of its customer satellites had reached their required orbit.

Chief executive Dan Hart adds that he is “confident” that the root cause will be determined in an “efficient and timely manner”, given Virgin Orbit’s previous successful launches using the vehicle and the quantity of telemetry it obtained from the UK flight.

“We are continuing to process and test our next vehicle per our plan and will implement any required modifications prior to our next launch,” he says.